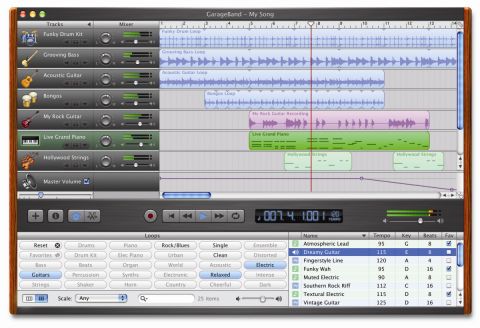 GarageBand deserved a good controller and now it has one. If you like the software, you'll love this.

You know that a music-making package has truly arrived when it gets its own control surface.

No right-minded developer would release a piece of application-specific hardware if they didn't believe that said application was in widespread use.

It makes sense that if the software isn't doing the business then the controller doesn't stand a chance.

The release of iControl, then, marks another important step in GarageBand's evolution.

Apple's software may initially have been pigeon-holed as a beginner's package, but most would now agree that, although it's insanely easy to get to grips with, GarageBand is also powerful enough to be used as an end-to-end production tool.

That said, the success of iControl is not guaranteed. Although there are thousands of GarageBand owners out there (it ships with every new Mac), M-Audio can't be sure of how many people are actually using it on a regular basis.

What's more, they're banking on the fact that a good number of the software's users will also be willing to go the extra mile and spend upwards of £100 on a dedicated controller.

First impressions of the iControl are excellent. Its design is very similar to that of the GarageBand interface - right down to the wood-effect side panels - and the controls are well spaced.

It's also worth noting that the build quality is far superior to that of M-Audio's other controllers - this is a neat and well-constructed device.

Setting up takes seconds - all you have to so is plug in the USB cable (the device also has a MIDI In port so you can attach a controller keyboard).

There are no drivers, and because iControl is designed to work exclusively with GarageBand, all the knobs and buttons are configured right from the word go.

This will be of some comfort to people who've never used a hardware controller before; there's no need to worry about assigning knobs and faders if you're an iControl owner.

GarageBand is notable for its lack of a traditional mixing console, and similarly, the iControl has no bank of faders. Instead, there's a panel of controls that mirrors the Track and Mixer sections in GarageBand.

This contains eight vertically stacked channels, each of which features track select, record enable, mute and solo buttons, plus a rotary control.

iControl has two modes of operation, the first of which is All Tracks. When you're in this mode, the rotaries (which are notched and endless) are used to set the tracks' volumes or pan positions. You can easily flick between these two parameters by pushing the corresponding buttons.

The other mode is Selected Tracks: when this is engaged, all eight rotaries are used to manipulate a single track. What they control depends on which one of the five selection buttons you've pressed - Track Info, Generator, Effect1, Effect2, or EQ.

Once you've chosen one of these options, the rotaries will automatically assign themselves to the parameters that can be tweaked.

So, if you press Generator, for example, the selected track's Generator window will pop open and you'll be able to adjust the parameters therein.

Hit one of the Effect buttons and, again, the corresponding window will pop open and the rotaries will automatically be assigned. Because all the parameters in these windows are vertically stacked, it's easy to work out what each rotary will control.

Other notable features on the iControl include Track/Parameter buttons (these are used to move up or down through tracks or parameters eight at a time), an Option button (used to access the other buttons' alternate functions) and a set of transport controls. Again, this mirrors GarageBand's transport panel - as does the Master Volume slider.

Also onboard is a jog-wheel that can be used to scroll forwards or backwards through your song, and to set up any loop points.

Spend a bit of time playing with the iControl and its usefulness quickly becomes apparent. The process of mixing can be a bit fiddly in GarageBand, but the rotaries make it a far more pleasant experience.

Perhaps the biggest thing you notice is how much you can cut down on your mouse time. It's great to be able to access the various track editing windows with single button presses, and the inclusion of a jog wheel is a masterstroke.

It speeds up your workflow considerably, and the same could be said of the transport controls. On the downside, iControl isn't really much good when you're working with third-party plug-ins.

The rotaries do function, but you have no idea what each one will control. As such, they're of little practical use.

As an everyday GarageBand controller, however, iControl works wonderfully. It's extremely easy to use, and will certainly help you to work in the software more efficiently.

You probably wouldn't want to buy an iControl if you plan to upgrade to a more powerful sequencer at some stage, but if you're sticking with GarageBand for the long haul, we wouldn't hesitate to recommend it.