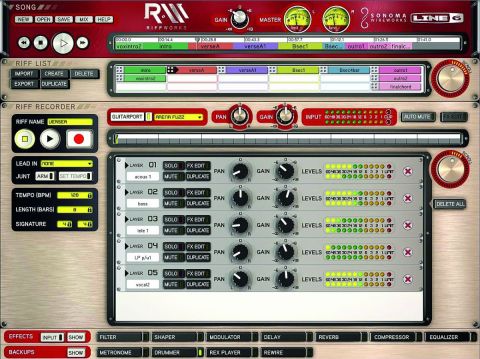 Whether deserved or not, guitarists have a reputation for being somewhat technophobic.

The Line 6 GuitarPort package is arguably the easiest-to-use amp modelling option on the market, its well-designed software and USB interface endearing it to many. However, guitarists who have wanted to record with it have always had to add a sequencer into the equation as well. Until now, that is. GuitarPort RiffTracker comprises the full version of the GuitarPort 2.51 software, the retro-styled hardware interface and the all-new Sonoma Wire Works RiffWorks, which is designed for recording complete tracks.

Installation is very straightforward: load the software, plug in the hardware and it works. A one-off connection to the internet is required to activate RiffWorks - if you don´t do this, the record, save and mix functions are disabled. The hardware interface is identical to that in the GuitarPort package, except for the presence of a single RiffTracker logo. Your guitar plugs into the front and the large dial on top sets the input level. At the rear there´s a USB connection, stereo phono outputs, and 3.5mm line-in and headphone sockets.

The RiffWorks software´s user interface is easy on the eye and clearly laid out. The rack-effect modular design is in keeping with that of the GuitarPort software and very easy to navigate. The Riff Recorder is used to record your performance. Recordings are then stored as layers, and each of these is represented as a rack module at the centre of the interface. All of the modules have pan and gain controls, plus solo, mute, duplicate and FXedit buttons. This last button displays the layer´s effects settings in the effects section at the bottom of the screen - each individual layer can have up to seven effects. You can also apply effects to the input signal and record them. This is kinder on your CPU, but means that the effects can´t be edited later on.

Guitar tones are created using the excellent GuitarPort software, the interface for which is accessed via a button on the RiffWorks interface. If you´ve already got a favourite tone saved to disk, you can load it straight in via a drop-down preset menu. One of the best features of the software is the Junt function. This allows you to either arm for recording or set the tempo by palm muting your strings and strumming. It´s inspired. Above the Riff Recorder is the Riff List. A Riff is made up of one or more layers and stored here ready to be arranged in the simple sequencer above. Riffs can be dragged around, renamed, duplicated, deleted, imported and exported. Each Riff can have a different tempo, length (up to 240 bars) and time signature. These settings are configured using the fields in the Riff Recorder.

A song arrangement is created by dragging Riffs into the single sequencer timeline at the top of the interface. The hierarchical nature of the software gives you a very intuitive and uncomplicated way of working - songs can be built up extremely quickly by duplicating existing riffs and adding new layers. At the bottom of the interface is the Backups section. This features four elements: Metronome, InstantDrummer, REX player and ReWire. The metronome has gain and pan controls and offers a choice of bassbell, hi-hat or snare sounds. The REX player allows for the import of up to four different REX files per riff, and these automatically stretch to song tempo. The ReWire section, meanwhile, allows you to use up to four other programs in sync with RiffTracker.

Finally, there´s the InstantDrummer. This is fantastic and puts all other guitar modules´ drum accompaniment systems to shame. It´s ridiculously easy to use and sounds superb. There are four controls: Intensity, which determines the vigour with which the drums are played; Variation, which sets the complexity and variety of performance; Ambience, which adds room sound; and Gain, which is used to set the level. Session and Part drop-down menus allow you to select the sounds and styles of the drummer. Four sessions are included: Afro Island Grooves, Drums on Demand, Mekanic Beats and Trash Funk. Parts include intro, verse, chorus, fill and so on.

All parameters can be set per Riff, which makes this a highly adaptable accompaniment environment. What´s more, an ever-expanding library of drummers is available for purchase online. Once you´ve completed a song, you can use the mix function to create a finished WAV or compressed Ogg-Vorbis file. You can also use the mix-to-riff function to mix several riffs into one.

It´s hard to fault GuitarPort RiffTracker. It looks great, sounds great, is very easy to use and comes with its own audio interface. You get a great selection of Line 6 amps and effects that come straight from the industry-standard PODxt, and also seven unique and creative Sonoma Wire Works effects. What´s most impressive, however, is the ease with which RiffTracker allows you to record and sequence a song. If you´re looking for a simple, high-quality, one-stop guitar studio solution, we thoroughly recommend it.