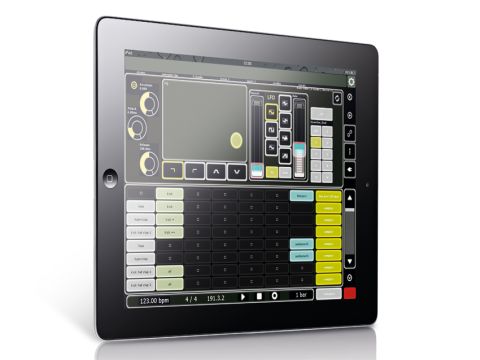 The most powerful music controller ever, on the most intuitive platform around, at a very reasonable price.

Yeah, it's THAT Lemur - the control interface that ran on JazzMutant's 2,000 euro touchscreen hardware, used by artists such as Björk, Daft Punk, Justice, Orbital and Richie Hawtin. It's been brought to iOS by Liine, a company already visible on the iOS music scene with apps including Kapture Pad, Remiix, and the Griid clip launcher/mixer for Ableton Live.

Lemur uses a collection of objects, including faders, buttons, balls, knobs, breakpoints and menus. These are assembled into custom templates, using the Lemur Editor application, and configured to send MIDI or OSC commands to software on your computer - Ableton Live, Reaktor, Traktor, Modul8, whatever. As if that isn't enough, custom scripting and integration with Max/MSP or Max For Live creates a more complex layer of near unlimited options.

Uniquely, Lemur has a physics engine that simulates 'gravity' or 'friction' type behaviours, including the notorious (and sometimes derided) bouncing balls you've probably seen in Lemur demos. All very well but, history lesson aside, how does it translate to the iPad, iPhone, and iPod Touch?

And here's another question - what makes the app worth a penny short of £35, when other perfectly functional control apps are a lot less? Some scepticism might be forgiven at this point!

Getting started with Lemur isn't actually too difficult - Liine's website features a user library of free templates, initially based on 'legacy' Lemur hardware examples, so you don't have to dive straight into building your own.

Existing Lemur owners will be happy to reuse their old templates, and there's a handy Lemur Stretcher application that resizes those older templates to fit the iPad. Completed templates are loaded into the app via iTunes, or updated through the Editor over WiFi.

Lemur typically connects to your computer through an ad hoc WiFi network (routers introduce too much latency). As mentioned above, it can send MIDI or OSC - for wireless MIDI communication you need to run the Lemur Daemon receiver app, but you can use a hardware MIDI interface, which is said by Liine to be the lowest-latency solution.

It was spooky to load Mu, a Live-dedicated setup that ran on the Lemur hardware, released back in early 2010 - this is like the daddy of Griid, displaying clip names and colours, and with scene launching, a mixer, device controls and sends. Mu is still totally usable, though you also need Max For Live.

The biggest challenge with Lemur is figuring out an 'ultimate' control layout, if there is such a thing - most of the user library examples are somewhat brainiac looking, but don't be embarrassed to make big dumb setups with big fat buttons. Pick a template that most resembles how you want to work, then edit that, and save the scripting for later.

We missed the KBMouse object, which enabled Lemur to send keyboard commands; hopefully this powerful feature will return in the future, otherwise you can use Max/MSP or Max For Live to compensate.

Once the science project of setting up is complete, it's time to play. Liine is talking up Lemur as a stable, professional product, and the app indeed proved stable during the review period, with the controls being very responsive.

MIDI latency over WiFi was usable, but for instrument input, as with the keyboard template, latency was negligible with wired MIDI, going through IK's iRig MIDI. This would also be a safer option for live use, because iRig can provide mains power to iOS devices, unlike some other interfaces.

Tech support is greatly improved over the JazzMutant days - it's much easier to get the info you need, which was a major complaint previously. We'd like some Logic templates, and I'd suggest a free feature-limited version might help the undecided commit. In-app template editing is missing.

Lemur comes alive on the iPad - this is how it should always have been: portable, battery powered, cable-free, ready to take anywhere. It's even valid on the iPhone and iPod Touch for those odd little remote control functions, or as a sidekick to the iPad version.

Lemur will suck up all of your spare time, and your other gear might get dusty. The price? Totally worth it. This Lemur comes in at roughly £1,600 cheaper than the hardware version, and you can run it on multiple devices.

iPad's progressas a destroyer of hardware is awesome to behold, and it's found the perfect partner with Lemur. This is the most exciting development in iOS music's (short) history.