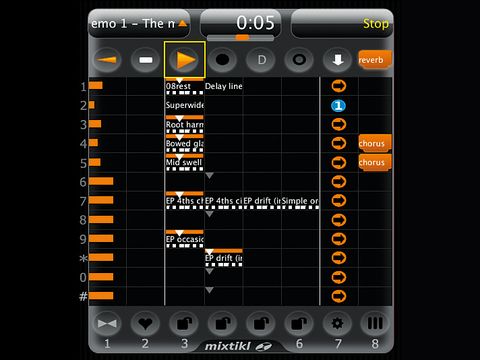 Get past Mixtikl's diabolical interface and you'll find a superb generative music engine waiting to be explored.

Mixtikl 2 is a multi-platform program that attempts to bring some of the spontaneous song construction of apps like Ableton Live and Sony Acid Pro to the world of generative music. It comes in Windows and OS X desktop varieties (standalone, AU and VST), as apps for iPhone and Windows Mobile, and you can even run it in your web browser using a plug-in.

Here, we're reviewing the Mixtikl 2 Bundle (act fast and you can pick it up for the introductory price of $40), which includes the desktop and WiMo versions along with three extra 'Tiklpaks' of content. We'll also put the iPhone version through its paces.

The basic premise is thus: drop the musical elements you like onto a matrix and hit play - the result is a piece of music generated in real time that you can twist and tweak to your own personal style. Before you get to that point, however, you have to wrestle with one of the most bewildering user interfaces we've ever encountered.

Whichever version you use, you get exactly the same interface, the same constrained list of options, and the same tiny flickering symbols and scrolling text. This isn't something you'll want to try on your 30"-inch Apple Cinema HD Display, which may even keep Mr Eno from joining the party.

Fortunately, the standalone desktop version (but not the VST or AU plug-in) can double in size. But even then, it's still difficult to navigate through lists, go backwards or forwards in the file navigator, create a new patch, save an old one and work out what goes where. We appreciate that compromises have to be made to produce an app that works on so many platforms, but this particular interface is fundamentally flawed.

"This isn't something you'll want to try on your 30"-inch Apple Cinema HD Display, which may even keep Mr Eno from joining the party."

If you can get past these serious problems, though, you'll find Mixtikl to be a generative powerhouse. Upon opening the app, you're greeted with a list of 'applications' (as Mixtikl's confusing terminology would have it) and the Mixer app enables you to combine audio and generative components to create music. It's what Mixtikl is built for, and it also houses the screen you'll spend most of your time on: a grid with 12 horizontal tracks, where you sequence elements and add real-time effects to create a new mix of generative music.

Each horizontal track has a central row of four blocks, each of which can hold either an audio loop, a General MIDI sound generator or a synth sound. The notes used to generate the sounds of the last two are embedded within each patch, and you'll need the accompanying Noatikl software if you want to design generative music from square one. Mixtikl's approach is more immediate, letting you place blocks of sounds alongside one another without worrying too much about how they were made.

Selected via the seventh column, each track can use one of three playback modes: looping, where a cell is played repeatedly (click/touch to select which is currently active); sequence, where they play from left to right, looping back to the first after the last is played; and one-shot, where a selected cell plays once then stops. Volume, pan and mute groups are found in the first two columns, while the final column is used to add real-time effects to each track, and there's a considerable selection, including delay, chorus, distortion and reverb. Effects can be chained together using a signal flow diagram, and you have complete control over most parameters.

When you're happy with a mix, you can render a WAV file or even share the tune with other Mixtikl users via the medium of text: your generative mixes can be converted to a string of characters (typical mixes are around 130 characters long) then emailed, posted on a forum or even broadcast via Twitter.

The desktop versions of Mixtikl 2 feature a very in-depth sound generation engine that gives you plenty of control over what your masterpiece sounds like. To access this, you'll need to look at the second item in the App list, dubbed File Player. Unintuitively, this is where you can edit the various components that are used by the mixer.

You can create synthesised sounds using a complex but crudely executed form of modular synthesis, dragging oscillators, f­ilters, envelopes and e­ffects into an audio chain for use as a sound source in the mixer. Audio e­ffects can be built in the same way and freely used within the modular synthesis construction.

You can import Ogg Vorbis, WAV, AU and DLS audio f­iles and use these as sample sources or loops. All sounds are played back according to the notes in what is called a MIDI line, a sequence of events that can be attached to a MIDI channel and given a polyphony count. It's these MIDI lines that introduce random variation and the generative aspect to Mixtikl, and they can't be edited, which means you have to start your sound generation with a preset with a note sequence you like. You'll be needing intermorphic's Noatikl if you want to create your own MIDI lines.

Despite the interfacial problems, Mixtikl delivers the generative goods, and can in fact sound staggeringly good. If you've been waiting 20 years for a sequel to Eno's Apollo or The Pearl, then wait no longer. Load up the IM GenMix1 pak, choose the New Empty option, add a couple of tracks featuring EP 4ths chord circle, EP drift 1 and Low swell pad. Then sit back and enjoy…

As far as results go, it's almost perfect, and you'd never guess that some of the stuff coming out of Mixtikl is computer-generated. There's an infinite variety of possibilities, but the inclusion of loops and samples means you can create sound that isn't strictly of the Eno school of ambient meandering, and the modular synthesis and effects aspects enable you to warp and distort the output in any number of ways.

The sound quality is good enough, and you can incorporate Mixtikl mixes into 'proper' projects using the VST/AU versions in your DAW. However, it's disappointing that these lack host sync, multiple audio outs and MIDI out (Mixtikl does respond as a MIDI instrument, however). Using it on the move, meanwhile, means you can experiment with ideas and textures without worrying too much about their construction.

Despite the sub-par interface, there's no denying the musicality of Mixtikl's end results, which really are in a class of their own when it comes to generative music, and it's worth the pain and effort required to get there.