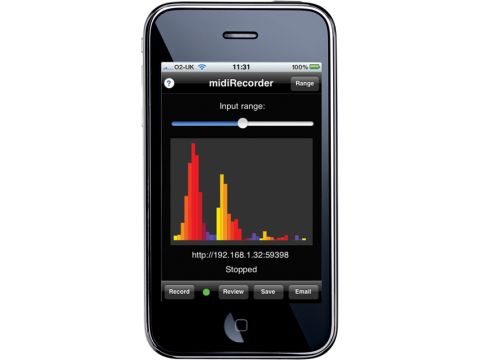 While being attractive on paper, in practice, MIDI Recorder falls short.

MIDI Recorder takes audio input from either the built-in mic of your iPhone or an external mic on the iPod Touch and attempts to turn it into MIDI note data. It works with monophonic input only and is capable of detecting up to 20 notes a second.

From the moment you launch the application, a colourful matrix of dots in the centre of the screen updates in real time to display exactly what notes would be generated. Tap the matrix and this changes to a spectrogram. A sole slider is used to restrict the converter to any three octaves between C2 and C7. Hit the Record button and the notes are placed in a buffer - these can then be previewed using an in-built synth, emailed or shared across the local network.

Unfortunately. the detection algorithm simply isn't accurate enough to be useful - most captures resulted in a mess of notes, and it also crashed on us a couple of times. MIDI Recorder can be used creatively, but only if you're in a quiet room and you're very good at whistling.