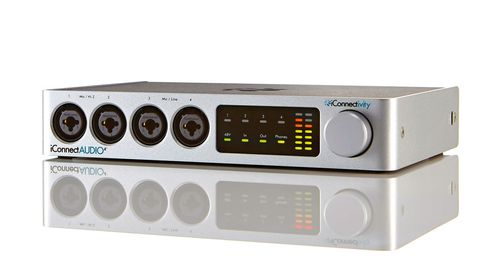 An ideal bridge between iOS recording and the expanded capabilities of desktop recording.

The 'gap' between iOS and desktop recording systems has been steadily closing in recent years. Initially, those used to traditional studio environments dismissed iOS music apps as toys, while those switching from iPads to the studio were baffled by what they perceived as a lack of immediacy.

As more 'established' manufacturers have released iOS products, bridges have been built between platforms and, to strengthen these supports yet further, comes the iConnectAudio4+ from iConnectivity.

As we'll see, this interface has plenty of aces up its sleeve, and the first of these is that it allows for simultaneous connection to two devices - in any combination of Mac, PC or iOS product, with the latter supported via a supplied Lightning connector cable.

However, adjustments can be made directly here. Want to increase volume to the headphones? Simply touch the Phones button and use the dial next to it to turn levels up.

Round the back, in addition to four analogue outputs, a headphone port can have its own mix configuration, which is handy - particularly for musicians wanting to run audio signals to and from iOS devices onstage, who might want a separate headphone balance from the mix being sent to the PA system. Additionally, you'll find two USB ports for device connection here.

To understand the possibilities, let's look at an example set-up. Suppose you've got a live filter effect app, through which you're running audio signals on your iPad and want to record the audio output to your computer for integration in a mix project.

This would usually involve plugging the headphone output of the iPad to your audio interface, thereby converting a digital signal back to analogue before converting it back to digital yet again. The Audio4+ keeps things in the digital domain by transmitting the converted signal to your computer.

Similarly, there's no need to rely on a second interface to connect your computer's audio outputs, as these are also sent back to the Audio4+ over USB. Pleasingly, latency is low and, to further whet your appetite, the Audio4+ can cope with audio configurations up to 24-bit/96kHz.

Just as usefully, Audio4+ is set up for extensive MIDI capability, again mining the immediacy of iOS devices and bringing these to your computer.

As well as providing old-school MIDI In/Out ports, the Audio4+ also allows for MIDI control over USB. So, you can connect your host keyboard and its MIDI signals can communicate with iOS synths. At this point, any audio being triggered is sent, as in the previous example, direct to your DAW digitally.

But this is merely the beginning of the Audio4+'s MIDI options. As the MIDI protocol allows for the virtual dials and sliders of iOS synths to be output as MIDI control data, via Audio4+ those signals can be sent on to your DAW to become controllers for your plug-ins.

So, as well as offering plenty of audio capabilities, Audio4+ can effectively act as a MIDI patchbay between control surfaces, iOS apps and your DAW. It gets better still as, via the USB Host port on the back panel and a USB hub, the device can support MIDI data from up to eight devices.

In conclusion, our only real criticism of the iConnectAudio4+ is its name. Not only does it not trip off the tongue but the audio element of its title masks the comprehensive other features on offer.

With impressive MIDI and audio capability running hand-in-hand, this is a box to underestimate at your peril. It represents perhaps the most joined-up solution for bridging iOS and studio needs to date.