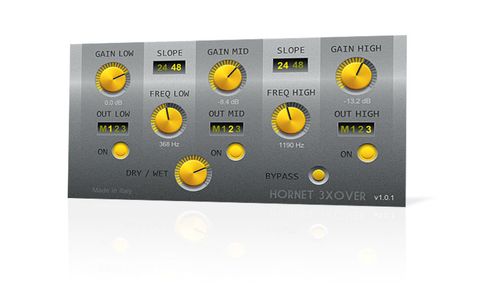 The range of corrective and creative uses this thing can be put to is endless… An essential.

The input signal is split into three user-defined frequency bands (with a choice of 24 or 48dB/octave slope at the low and high crossover points), each of which can be sent to its own audio output within your DAW.

So, load up a drum loop, set the crossovers to separate the kick, snare and hats, say, and send each one to its own mixer channel for individual processing. Or split up a bass synth part in order to just compress its very lowest frequencies.

The range of corrective and creative uses this thing can be put to is endless, and with kill switches in place for each band, there's lots of fun to be had automating it, too.

The only snag is that it doesn't work in hosts that don't support multi-output effects, Logic Pro (including the new version X) being a notable offender. Other than that, it's an essential.