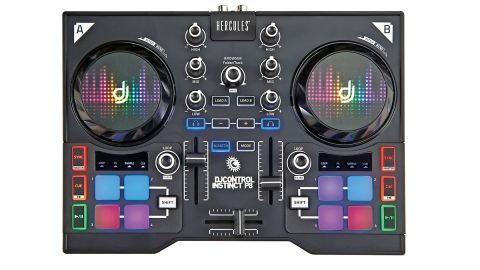 Not bad on its own merits but in a highly competitive entry-level market there are simply too many better alternatives.

A few months back we looked at the Hercules P32 Advance DJ Controller in combination with the DJUCED 40 software.

This time it's the same software with the much simpler DJ Control Instinct P8, a software/hardware entry-level hybrid DJing package priced around £100.

To sum up, DJUCED 40° is a simple and effective four-channel affair with optional tempo-syncing, a handy 2x 16-slot loop-playing function (with a decent Loopmasters library) and some nice DJ-centric effects. It's not Traktor Pro, but it's no slouch either, and far better than its name suggests.

There's also a four pad multicoloured LED backlit Performance section for each channel, allowing control over FX, loop lengths, cue points and sample/loop triggering. It can act as a MIDI controller for other software too but this will probably be a fairly niche bonus for most users. So far, so good: nothing amazing but totally functional and as well-constructed as you could expect at this price.

Featuring a colour scheme like a '90s Naf Naf shell suit, these wheels are our main bugbear. As long as such tiny jog wheels have featured on DJ controllers we have claimed they're a waste of space. You cannot scratch meaningfully on something that small, it's easy to skip through tracks using buttons and if you're using this kind of controller you're unlikely to beat-match manually (even if you are, nudge buttons would be at least as effective).

These wheels are added because they look the part to a certain type of buyer; and people must keep buying them as manufacturers keep adding them.

The P8 is not a terrible product by any means, and if you just want to play a few tracks at a party or event it's more than capable, but for me there are too many better options at this price range (including just using some DJ software on an iPad or laptop) and the jog wheels are so gimmicky, that we can't really recommend it.