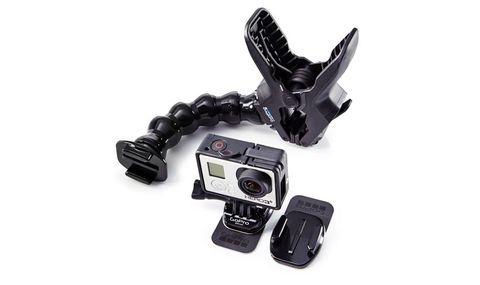 Good value pack that brings the GoPro to the musician with style and convenience.

GoPro, the company famous for its versatile, wearable cameras, has released a new music pack featuring the Hero3+ Black camera.

Included in the Music Bundle are four bespoke styles of mount: a flexible gooseneck, a clamp with soft-rubber jaws to ensure a firm grip without damaging your hardware, two instrument mounts and a mic stand mount. The instrument mounts use a sticky adhesive that will not leave marks once removed.

Also included in the pack is a 3.5mm stereo mic input via a breakout cable, so you can attach an external mic. However, we would suggest using the input for recording the mix from a desk as there isn't a control for adjusting the input volume.

You can connect to the camera via the free GoPro app which is available for iOS, Android and Windows. And it allows you to take control of all settings, clips and record modes via your phone.

It's also worth noting that the mounts are all sold separately - perfect if you own a GoPro already. If you don't, get this!