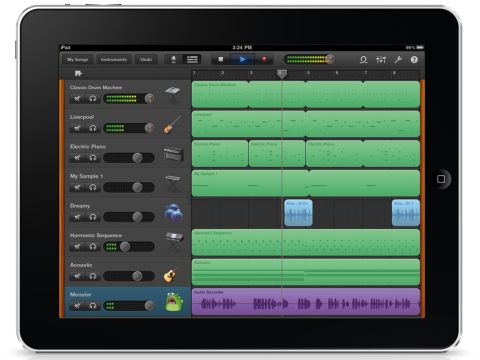 Apple's easy desktop DAW comes to the iPad, becoming one of the first iOS DAWs to feature software instruments and audio tracks living side-by-side. It's important to understand, though, that this is not the complete desktop GarageBand stuffed into an iOS app, but rather a far more limited beast that omits many features and has an eight-track limit, but works in roughly the same way. That said, it does offer its own additional multitouch-friendly features.

The basic instruments are an on-screen keyboard (piano, organ, electric piano, synth, etc) and drum kit (real or synthetic sounds), played by tapping the screen. There's a Sampler, too, into which you can record your own sounds. There are also so-called Smart instruments: virtual guitar, bass, keyboards and drums that force notes to the project's scale, or generate chords or drum patterns. All of them sound good, with velocity-sensitivity 'faked' via the iPad's accelerometer.

There's an Audio Recorder for capturing live audio, and this is where you can use the guitar amp sim's nine amps and ten stompbox effects. Four of the latter can be used at once, and you can adjust the tone after recording, too. Recordings are strictly a real-time affair, and there's a click track. You'll be happy to note that MIDI controllers are supported via the Camera Connection Kit. Effects can be added to sweeten the sound and MIDI parts quantised.

The track view is like the desktop version. You can move, resize, loop, split, trim, copy and paste clips. What you can't do, unfortunately, is alter the notes or timing, because there's no MIDI editing at all. We certainly hope this will come in a future update. You can drag Apple Loops from the provided library into your songs, but import options are absent - you can't bring samples in without recording them into the sampler, nor can you paste files from other apps. Bummer. Export options are email (MP4) or iTunes (AAC or GarageBand projects). However, you can't load a desktop GarageBand track into the iPad version.

Complaints aside, GarageBand is a lot of fun. We'd be lying if we said we weren't disappointed by the import/export options and lack of MIDI editing, but we can't deny that we thoroughly enjoyed whiling away the hours with this app.