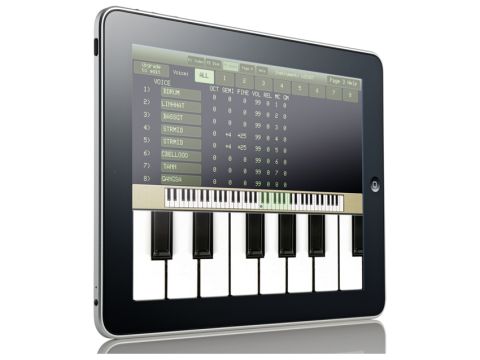 A true emulation, for better or for worse. A rich source of excellent world-famous sounds, though.

We all know the story - Peter Vogel and Kim Ryrie inadvertently invented sampling while trying to quickly model waveforms using real-life sounds as a starting point.

This accidental invention went on to capture the imagination of countless producers and spawned more genres and hit records than any other music-making technology to date. And now, it's made its return on Apple's iOS.

There are two versions of the Fairlight app available for either iPhone or iPad - namely, the Player and Pro versions.

We're reviewing the Player because we found the £30 Pro rather over-priced for its extra features - some extra CMI III library sounds at 16-bit and the ability to import your own samples for use on the Page R sequencer.

Nice additions sure, but for us this is all about ﬁnally owning the famous library of Fairlight Series IIx presets in their entirety. And while rather cramped on iPod and iPhone, the app and it's virtual CMI interface enjoys ease of use far in excess of the original machine when set free on an iPad.

Fairlight tell us that the "technique for generating sounds is identical to the CMI right up until the last stage", where Apple step in with their 44.1kHz Core Audio convolution.

However, the samples scientists at Fairlight are keen to stress that "no samples are dropped". And once you enter the 'All Voices' page to access the 560 sounds from the CMI IIx disks, you realise their hard work paid off.

The sounds are excellently retro, right down to the clicking loop points. All the famous patches are here ('Orch 2', 'Sararr', 'Swannee') so it's instant '80s via the on-screen keyboard or primitive Page R sequencer.

However, the real joy comes when using the app with your existing DAW over MIDI. You'll need a Core MIDI device such as the Line6 MIDI Mobilizer or Akai SynthStation but your investment will be richly rewarded.

Remember, this is a library of sounds that cost £20,000 to attain back in the day and are still very hard to come by in such a well-replicated form.

Dragging these sounds from the past also carries with it some annoyances and they mainly spring from Fairlight's instance on recreating the 'fun' foibles of the original machine.

Firstly, when loading the app you're greeted with an authentically retro jingle followed by a quirky mains voltage selector emulating the Fairlight's power switch - get it wrong and smoke is the only thing that comes out of the unit.

Likewise when you change pages, you get a one-second pause and ﬂoppy drive spinning sound. Next, when you load a preset, it takes three or four more seconds of ﬂoppy disk chugging.

Finally, your ﬂoppy disks will 'fail' from time to time, and while this 'reliability' can be dictated in the settings, it's beyond us why Fairlight doesn't include an 'Off' button.

They're all fun quirks… that quickly become grating annoyances. They also bemused a user on their FAQ page. Fairlight's response? "Welcome to 1980!"

We can't see anyone other than the real purists opting to use the clunky Page R over their current DAW, so what you're really buying this app for is its sounds.

While the quirks of 'ﬂoppy disk loading' may rather spoil the experience, these sounds are definitely worth the effort and £6 of anyone's cash.