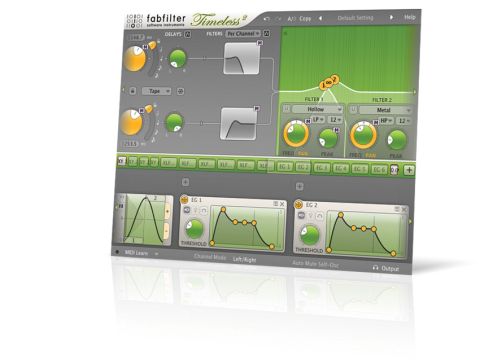 If there's a delay-shaped hole in your plug-in folder you should find that Timeless 2 is a perfect fit.

Has it really been three years since FabFilter unleashed Timeless, its ingenious dual delay? In 2006, there were already numerous delays available, both commercial and freeware, yet FabFilter proved to us that there was certainly room for more.

Everything that earned Timeless high marks back then is still in place. The effect remains a cross-platform VST, AU and RTAS plug-in, and FabFilter even offers a PC VST3 version. It's a downloadable product with non-intrusive keyfile copy protection. There's a PDF manual and built-in mouse-over help, too.

The architecture is familiar, with two discrete signal paths (L/R stereo or mid/side - more on these later), with independent control over each, such as different filter modes per side. Basic editing of the filter's parameters is carried out from the main window via a pair of interactive filter response displays. However, a click of these reveals a much more detailed filter section - indicative of FabFilter's interface ethos.

The delays themselves now offer a Freeze Buffer, which can be used to store a bit of incoming audio, playing it back continually while you manhandle the speed, filter settings and suchlike. It's a blast locking on to a snippet of audio and cranking the delay time way up for some bizarre pitchbending madness, courtesy of Timeless's tape delay emulation.

Also note that there's a timestretching mode where the pitch does not change when you alter the delay time - this works pretty convincingly for most material but can also be abused to create far-out effects.

One window alone can't contain this expandable plug-in, but rather than offering tabbed pages, Timeless 2's parameters are presented in a single, scrollable view, which is a good thing, considering that there are now six LFOs (newly fortified with 16 steps) and six envelopes, not to mention four X/Y pads.

So that's four more LFOs than last time and five more envelopes. There's a quartet of envelope followers, too. Each source is represented as a button in the middle bar and a click scrolls the relevant mod source at the bottom of the interface into view.

As for hooking up sources to destinations, FabFilter's brilliant click-and-drag modulation routing and MIDI learn are still in place, making this one seriously malleable processor. From subtle ADT to swirling echoes, there's a lot of power offered here.

Normally, you'll want to use Timeless 2 in the traditional 'Left/Right' mode, which enables two discrete channels of operation, each of which is pumped out of the appropriate output. However, there's another mode, offering the increasingly popular mid/side arrangement.

This routes the mid (mono) and side (stereo) elements to separate delay lines, enabling you to treat them individually, before they're converted back to a conventional stereo signal. Therefore, you could, for example, apply a stronger delay effect to the side part of the signal while keeping the centrally panned information relatively dry.

And, in case you're wondering, mid/side processing comes from the technique of mid/side recording, which uses a cardioid mic to record the centre channel, and a mic with a figure-of-eight pickup pattern to capture the side information.

At the risk of repeating ourselves (ahem), everything we said about the original Timeless still stands. There's no shortage of free delay plug-ins these days, but it's hard to put a price on inspiration, and Timeless is not only a versatile tool but a fun one, too.

The more we threw at it, the more ideas it threw back, and we found ourselves whiling away hours, enthralled by what we were hearing. Timeless 2 is well worth the asking price.

Liked this? Now read: The 11 plug-ins you can't live without and The best music-making apps on the iPhone