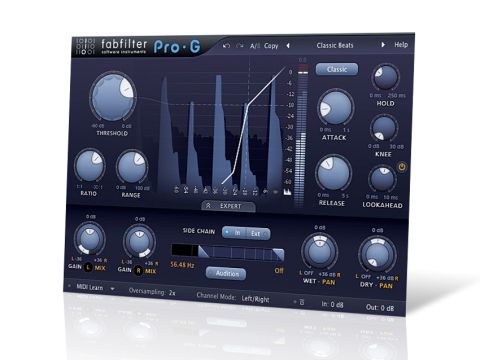 Minor operational grumbles aside, Pro-G is a golden gate indeed. Anyone working with recorded material needs to try it.

Achieving a good mix is as much about cutting out unwanted elements as it is piling on fancy enhancements - a noise gate can be useful here.

FabFilter has expanded it 'Pro' range of mixing plug-ins with Pro-G, a feature-packed VST/AU/RTAS noise gate/expander. The interface is in line with FabFilter's other Pro-series plug-ins, with undo/redo, pop-up help balloons, well-categorised presets and A/B comparison.

Like Pro-C and Pro-L, there's a scrolling graph of the incoming signal level. It changes colour to show the state of the gate: light blue when open; dark where closed.

On the left are standard Ratio, Threshold and Range (aka 'floor') controls. As explained in the manual, you can use the Range control to expand a specific area of the signal's dynamic range for a less overt/excitable style of expansion.

On the right are Attack, Release, Hold and Knee knobs - the latter gives a gradual transition near the threshold. One of our favourite features of Pro-G is that it offers up to 10ms of lookahead (this can be disabled, for zero-latency use).

This is a no-brainer for gating - it allows the gate to open just before, say, a snare hit, rather than reacting as it happens, which can lead to soft or 'clipped' transients. With lookahead, the gate opens just in time, for untainted results.

There's a mid/side mode, which enables such neat tricks as expanding the sides to make transients wider, though it's not as easy to set up as we'd like. Pro-G also offers up to 4x oversampling, though we couldn't even contrive a situation where this made any appreciable difference.

Any incoming MIDI note opens the gate while held, which is great for creative use - think 'trance gate' - or when you need to force the gate to open, say, for an unusually soft drum hit. There's no way to force it to close, however - to 'ignore' a sound that inadvertently trips the gate.

The Expert panel conceals further options, most notably the high and low-pass sidechain filters, which make it easy to restrict the frequencies the gate responds to. You can also enable an external sidechain input (the filters apply to this too).

While you can monitor the sidechain signal, it's not possible to listen to the 'inverse' signal; that is, the stuff that's being taken out. This is a shame as it can be very useful for making sure that the gate isn't mistreating transients, and can also be used as a neat effect in itself.

There are dual concentric knobs to set the balance of signals fed from the left/right inputs into the left/right detectors (eg, for stereo linked or unlinked operation). You can also set the level and pan of the output, and even mix in the dry signal.

We find the GUI unintuitive here. In mid/side mode, these knobs work in M/S (not L/R) fashion, which is even harder to get your head round.

The most novel aspect of Pro-G is its five Styles: Classic, Clean, Vocal, Guitar and Upward. Classic is the most universal, and is also capable of the fastest, most brutal response. Clean mode reaches open status sooner, and its release is more gradual - less punchy and obvious.

The Vocal mode is tuned to respond to breath and sibilance sounds; for example, we came across a vocal passage beginning with a 'th' sound that the other modes (and other gate plug-ins we tried) were slow to react to, making it sound soft. The Vocal mode dealt with it perfectly, with natural-sounding results.

Likewise, the Guitar mode also does what FabFilter claim, allowing natural decay and finger release noises through. The final mode offers Upward expansion, increasing dynamic range above the threshold. It's not something we would use in every mix, but it's good for restoring snap and punch to overcompressed material.

Pro-G makes light work of tidying up drums as well as electric guitars, bass and vocals. Features like its tweakable range, knee, style and lookahead mean it can handle any flavour of gating/expansion, be it artificially tight or natural.

We were a tad sceptical about the need for five gating/expansion styles, but it turns out, this and the lookahead are Pro-G's killer features.

Now listen to our audio demos to hear Pro-G in action:

Full mix - with Pro-G on all relevant channels