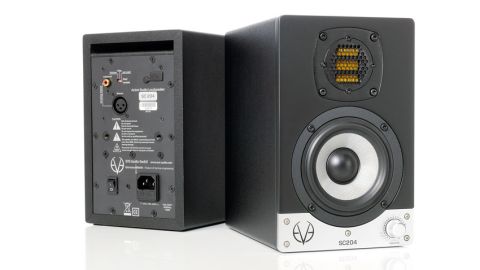 A great pair of small monitors from EVE that think they're bigger than they are.

The SC204 is the smallest of EVE Audio's new range of 12 loudspeakers, and with that ribbon tweeter it's certainly reminiscent of the ADAM range - but that's pretty much where the similarity ends.

For such a small speaker the first thing you notice when you take it out of the box is that the SC204 feels substantial. Its simple, yet distinctive, front panel has one single level control and all connections and dip switches for the various HF and LF filters are on the rear panel. On the base, there's a screw insert that allows you to put it on a mic stand and there are also inserts on the back panel to fit a wall-mounting bracket.

Having removed the transit covers for the tweeters, all you need to do is set the volume and you're off. The front panel level knobs have LED surrounds that allow you to accurately level match them, so you could even use them straight out of the back of a D/A converter in a portable setup.

With only a four-inch driver, nobody should expect a thundering bass response, but the SC204s have a well-rounded sound. First impressions were good: the overall balance is very even and with a wide variety of musical styles it stays remarkably consistent. With smaller loudspeakers the most important thing to look out for is how the lack of low bass affects the musical balance. Often manufacturers try to make up for it with very coloured porting designs.

EVE has sensibly opted for a rear-facing slot at the top of the unit which seems to make the bass roll off smoothly as it gets lower, avoiding the problems of certain notes getting unnaturally boosted and therefore making what low energy there is sound uneven when it's not.

In fact the SC204s stay remarkably even as you raise the playback level and have the ability to fill the room far more than their diminutive stature would suggest. The ribbon tweeters have a sweet and smooth response - our only criticism might be that the upper-mid response (2.5kHz) is perhaps little shy.

Putting up a few multi-track sessions and getting a balance was very straightforward, and balances made on the SC204s translated very well to other speakers in the studio - the last thing you want with a set of monitors is to feel that you have to go against your instincts when making a balance, to compensate for an uneven response.

In a studio control room, big speakers are there to judge the overall sound, especially in the low-end, and small speakers are used for balance and more of a 'real world' listening experience. The SC204s fit this bill perfectly - their lack of hype in the low-end and their extremely balanced sound give you everything you'd expect of something of this size.

If you only have a small working environment and specifically want a small footprint monitor the SC204s are also well worth checking out. They have plenty of detail and the fact that the response is even - from low levels right up to their surprisingly punchy version of loud - means you could mix on them very happily. Factor in the price and you've got two speakers punching well above their weight. Roland Stenz certainly knows a thing or two about loudspeaker design.