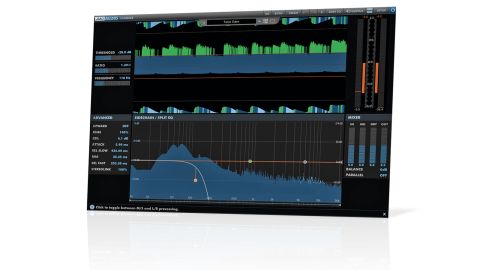 The current state of the art in de-essing, Essence is another stunning plugin from a developer who can seemingly do no wrong.

For basic vocal de-essing, the plugin market is well-stocked, but there are other, less obvious uses for de-essing at both the mixing and mastering stages, too. FabFilter's Pro-DS was one of the first plugins to really address this broader concept, successfully reducing harsh sibilance on any signal. Now, DMGAudio's new de-esser, Essence, claims it can do all this and more, including de-essing vocals within a full mix - something that's hitherto been very difficult to achieve with software dynamics processors without softening transients.

De-essing is generally approached from one of two directions: the traditional sidechain analysis and compression type (ducking audio levels when so-called sibilant frequencies are detected), or the separation and ducking of said sibilant frequencies prior to mixing them back with the rest of the signal. Essence caters to both options.

De-essing vocals with Essence couldn't be easier: insert the plugin, pull the Threshold down until the sibilance is gone and, if necessary, tweak the sibilant frequency setting. Job done. It sounds great doing it, too.

It's in the fold-away Advanced panel and the Setup dialog, however, that things get really interesting, opening Essence up to far more than just vocal sibilance correction, with adjustment of Lookahead, as well as Smoothing, Linear Phase, Sidechain Type, Oversampling, Dual Release and much more.

Extensive stereo functionality allows independent setting of Mid and Side channels in Mid/Side mode, or Left and Right channels in L/R mode, and there's a range of sidechain detection EQ/filter types (up to a whopping 192dB/octave roll-off).

For visual feedback, there are frequency analysers, signal meters and a scrolling gain reduction display - all, in combination with the plugin's exceptionally detailed controls, enabling scalpel-precise frequency-targeting.

Essence deserves to find real favour with mastering engineers, thanks to its surgical approach to de-essing previously unmatched in plugin form or at even close to this price point.

But what about those users who neither mix vocals nor master their own tracks? Well, Essence does double service as a kind of dynamic EQ, as demonstrated by some of the excellent presets. It's almost a one-stop shop for kicks and basses, yielding punchier and more transparent results than regular EQing; while the Tame Subs and Kick De-Boxify presets, placed on the master out, can be helpful in cleaning up demo mixes.

For anything lacking in sparkle, Essence can also act as an expander (raising the level of sibilant frequencies). Mastering and mix engineers dealing with clumsily de-essed vocals rejoice!

Despite its complexity and power, Essence is a very easy effect to use, with plenty of useful, highly demonstrative presets onboard. The manual is well written and informative, and the plugin itself makes it easy to experiment and compare tweaks, with the ability to copy and paste between its eight A/B slots.

In short, Essence is the most impressive de- esser plugin we've ever used. Even if you never deal with vocals, it's so effective as a dynamic EQ on musical parts and full mixes that no producer/ engineer could fail to find a use for it. It imparts a smooth, professional sound to channels, groups and full tracks, and sets a new and very high benchmark for software de-essing.