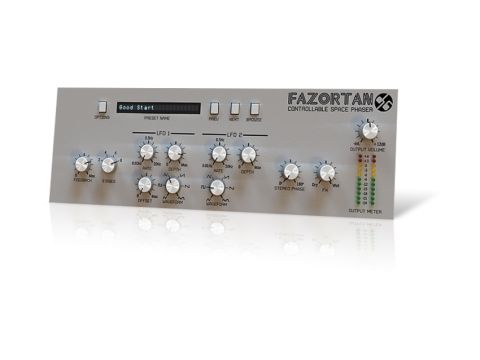 Fantastic phasing at a knock-down price, but a few odd omissions conspire to hold Fazortan back from true greatness.

With Fazortan, D16 has turned once again to the '70s for inspiration. Phasers might be a dime a dozen, but they're rarely truly reminiscent of the rich, swirling effects so beloved by guitarists and keyboardists alike.

As with so many sounds of the 'vintage classic' variety, it's the units' little sonic imperfections that create the sound we know and love, and as we've seen before, emulating these in the digital domain is no easy task.

Part of D16's recently-launched Silver Collection, Fazortan's interface is quite similar to that of Devastor. Like that plug-in, the hardware-inspired fascia combines a collection of knobs and buttons with a faux LED that displays the currently selected patch.

The parameters on offer are pretty much what you'd expect from a phaser: there's a Feedback knob, and you can choose two-, four-, six- or eight-stage operation. It's also possible to rotate the stereo phase and adjust the wet/dry mix.

Fazortan breaks away from the pack with the inclusion of two LFOs. Each of these includes Rate and Depth controls, and the Depth of LFO 1 can be offset. The waveforms available range from triangle, square and sine to ramp and sawtooth. A random wave is also provided.

As we've come to expect from D16, MIDI control is on tap, while there's a reasonably sizeable collection of presets that are, without exception, superb. They run the gamut from broad Klaus Schulze sweeps to pumping, percolating pulses.

We tried them on everything from guitars and keys to drums and basslines. Dialling in custom patches is very easy and, more importantly, the consistently great effects encourage you to get hands-on and go beyond the presets.

Fazortan sounds fantastic, featuring that thick, noisy swirl that's often missing from digital phasers. D16 isn't specific about which classic device it's based on, but their website drops a few hints that point to Electro-Harmonix's classic Small Stone as the plug-in's inspiration.

However, Fazortan is not without its flaws. For a start, the LCD could be put to better use if it reflected the value of any active knob. It does, however, denote MIDI Learn activity.

We were quite disappointed to learn that the LFO rates don't sync to the host, especially considering that there are sharp-edged LFO shapes beyond the usual sines and triangles onboard. This is a bit of an oversight, we feel, though D16 reckons that such functionality should be coming in a future update, so here's hoping.

Nevertheless, Fazortan's true appeal is in its sound. If you feel that your current collection of phasers comes close but fails to finish, Fazortan it might be right up your alley.

Take a listen to what Fazortan is capable of: