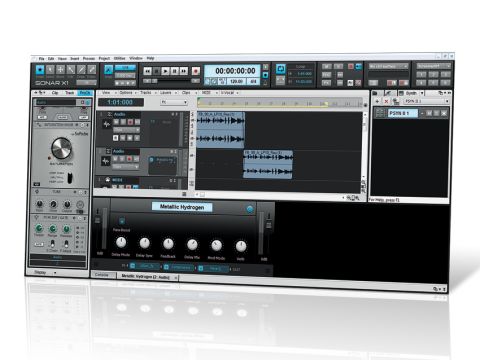 Some powerful extra features at a great price, but some fundamentals should be included in all versions as standard.

At the end of last year, users of Cakewalk's PCDAW Sonar were treated to a free update that not only fixed stability issues, but also provided a number of new features.

Specifically, Sonar X1c rolled out independent Snap settings in the Piano Roll view, selectable and groupable busses, a new timecode format, and some GUI enhancements to the Step Sequencer and Loop Construction view.

"You can mix and match the EQ and dynamics processors and arrange them in any order, scrolling vertically to access them."

However, X1c wasn't the only update made available at that point - Cakewalk also released the entirely optional Sonar X1 Producer Expanded. Costing just 35 quid, it's only available for X1 Producer owners - controversially, X1 Studio owners looking to get in on the action have to upgrade to the Producer edition first.

Sonar X1 Producer users have always had access to the excellent ProChannel console strip, which Expanded supercharges by making it fully modular.

You can mix and match the EQ and dynamics processors and arrange them in any order, scrolling vertically to access them. This takes ProChannel to new heights of flexibility, and seasoned engineers are going to eat it up.

Equally excitingly, ProChannel's architecture has been opened up so that it can be expanded with add-in modules - plug-ins, essentially!

X1 Producer Expanded also enhances Sonar's FX Chains, enabling you to create custom control interfaces for your bespoke plug-in effects combos. Said interfaces can host to up to six knobs and six buttons, each freely assignable to any of the plug-in parameters in the Chain.

I/O level faders and meters are also in place, as are global and per-plug-in bypass buttons. 100 preset devices are included, covering a wide range of uses. This is powerful stuff, though we can't help wishing for a little more - six knobs ain't enough.

With Sonar X1 Producer Expanded, the ProChannel channel strip becomes a modular system into which new processors from Cakewalk and third-party developers can be added. The first of these - Saturation Knob, a distortion modeller from Softube - is included with Expanded. It's a very simple module, but the sound is quite convincing. One knob dials in the amount of distortion, while the position of its single switch determines which frequencies are affected.

Cakewalk also sent us the PC4K S-Type Expander/Gate (£35) to try. It features Threshold, Range and Release controls, plus switches to activate sidechaining and a fast Attack setting. This gate does the job with a decent enough sound, and is a useful - if not essential - addition.

With Sonar X1 Producer Expanded, audio can beuploaded to SoundCloud directly from within the DAW. This is a great feature, of course, but one that we really think should be made available as standard in all versions of Sonar.

SoundCloud upload feels like a right rather than a privilege these days, so it seems like a very strange thing to have to pay extra for.

Ditto for the Browser expansion, which now enables drag and drop of synths into projects, aswell as audio and MIDI loops from projects tothe media library.

These functions are readily available in other DAWs, and many Sonar Studio users aren't too happy about having to upgrade to Producer and Expanded to get their hands on this sort of meat-and-potatoes functionality.

While we're on the subject of export, we'll mention that X1 Producer Expanded supports MusicXML, a common sheet music format that enables users of Finale, Sibelius and various other music notation programs to open up projects made in Sonar.

We're a bit puzzled by Cakewalk's piecemeal upgrade approach. While we appreciate that the company gotta make cash, and it's great to be able to order up DAW enhancements à la carte, it'd be better if they were also available to those who use something other than the Producer edition. Indeed, wouldn't it make more sense to allow those users to pay to add in the bits they'd like?

For Producer owners, however, Expanded is a no-brainer. The updates to the ProChannel and FX Chains alone justify the fee.