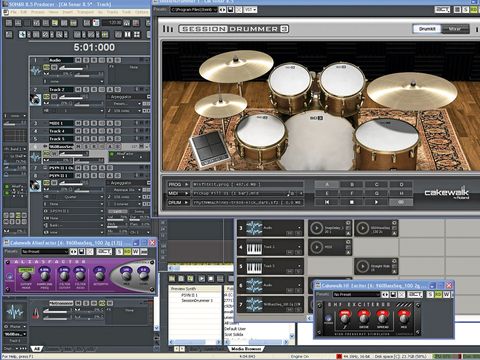 Don't be fooled by the name: Sonar 8.5 is essentially a full new version in disguise and a must-have upgrade.

Cakewalk is nothing if not dependable. Every year, around Autumn, it releases a major upgrade to its flagship DAW, Sonar.

It comes as a surprise, however, that the latest Sonar offering is not a full upgrade, but rather a pay-for point release. This has caused some consternation amongst Sonar users, but such concerns are, in fact, unnecessary.

Not only is Sonar 8.5 packed with interesting new features (and some pumped-up old ones), but it sports a lower-than-usual upgrade price. It runs on Windows XP, Vista and Windows 7, though we were unable to test with the latter as it wasn't released until near the end of our review period.

We're looking at the full Producer Edition and some of the most significant improvements in 8.5 are updates, such as Step Sequencer 2.0. The first model of this was inextricably tied to drum maps, but this new one can be routed to any MIDI output or software instrument.

The individual rows are now expandable, revealing controls over timing, flam, portamento and, most importantly, velocity, which is shown in the familiar vertical bar-per-step fashion. Not as obvious is that converted MIDI clips retain their timing, if you want them to - very nice!

Beat merchants will be pleased to learn that the third incarnation of Session Drummer is vastly improved. This version presents a slightly gimmicky animated interface and a selection of sampled electronic and acoustic drum kits, and MIDI patterns suitable for a variety of styles.

Amongst the acoustic and mixed drums are some astonishingly realistic combos that certainly had our toes a-tapping. You can bring your own samples and patterns in, too.

In our Sonar 8 review, we complained that it wasn't possible to use Cakewalk's Arpeggiator MIDI FX plug-in on Sonar's instrument tracks. Now, though, there's a powerful arpeggiator built into each and every MIDI and instrument track, featuring hundreds of preset patterns, designed for drums, guitars, electric pianos and more. You still can't use Sonar's MIDI effects on Instrument channels, though.

Some of the most fun to be had with Sonar 8.5 comes courtesy of the Matrix View, which is a performance environment for audio and MIDI loops à la Live's Session View and, indeed, the Groove Matrix in Cakewalk's own Project 5 (although it's not a port -it's brand new code).

The interface consists of a grid, in which each row is assigned to any track in your project. Splayed out across these rows are an unlimited number of cells, into which you can drag a single MIDI or audio clip - only one cell per row can be active at once, but you can pile on as many tracks/rows as you like.

If Groove Clips are used, your loops will lock to the current tempo. Loops can start playing immediately or at the next bar or beat division (down to a 64th-note), and can be retriggered, latched, controlled via MIDI and more. Your real-time performances can also be recorded for further editing.

The AudioSnap audio quantisation system is now at version 2. The palette has been reworked to improve workflow, and it certainly makes much more sense to us than previously. There's now a dedicated tool that enables you to drag and snap individual transients into position, and tempo detection and audio rendering quality have been improved, among other things.

We've covered the headline additions, but suffice to say that enhancements and refinements abound. There's REX file support, audio engine tweaks, hardware hotswap capability, tabs to flip the mixer on the lower half of the display to show the Synth Rack or revised Media Browser (formerly Loop Explorer)… the list goes on and on.

The 11 new effects bundled with Sonar 8.5 constitute yet another pleasant surprise, as this kind of stuff is usually reserved for full version updates.

The shining stars of the group are, without doubt, the PX-64 Percussion Strip and the VX-64 Vocal Strip. The former offers transient shaping, dynamics, EQ, delay and tube saturation for knocking your percussion tracks into shape, while the latter is for shining up vocals, comprising a de-esser, compander, tube EQ, doubler and delay. Oh, and saturation, of course.

They both sound the business and could easily retail for the upgrade price on their own. As a bonus, there are dozens of presets for each, covering a wide range of needs.

Joining these channel strips are several individual effects taken from Cakewalk's Project 5 DAW. There's a particularly nice filter/bit-crusher in the shape of Alias Factor, and we were also pleased with HF Factor, an exciter designed to be used as an overall sweetener, adding high-end harmonic content to make the signal brighter and give it increased presence.

There's also a mod filter, a retro phaser, a chorus/flanger, another delay (stereo, natch), the self-explanatory Stereo Compressor/Gate and a rather nice, CPU-friendly parametric EQ. Oh, and a new version of Studioverb.

Overall, the new tools in 8.5 work well and the effects sound terrific. As has typically been our experience with Cakewalk, the software is reassuringly stable (we were running the 8.5.2 update, which should be out by the time you read this). Furthermore, we had no trouble running Sonar on machines that fell well below the recommended spec.

One caveat is that, when using the 64-bit version, certain features and functionality (eg, MPEX timestretching, ReWire to 32-bit apps, QuickTime support) are absent. We can't blame Cakewalk, however, as it's clearly dependent on third parties for these technologies to be implemented for 64-bit operating systems.

In our Sonar 8 review, we concluded that that version was focused primarily on optimising what was already there. However, 8.5 - a 'mere' point update - is overflowing with new goodies that will not only improve your workflow, but offer inspiration as well.

It's definitely worth the upgrade fee for existing users (that being noticeably less than the usual full version rate), and Sonar remains a keen musical investment for anyone who buys the package outright.

Hear some of Sonar 8.5's new features in use: