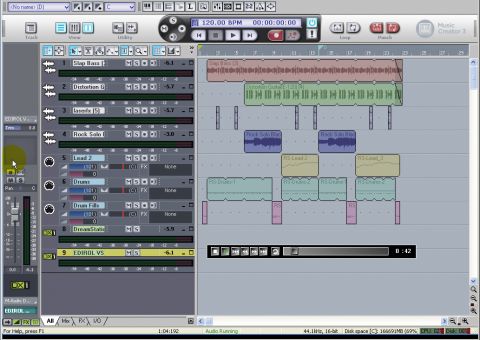 Music Creator 3 has a decent feature set, but if you've never used a recording package before it could leave you scratching your head.

Competition at this end of the market is fierce, with software becoming both more powerful and easier to use. As such, Music Creator 3 can't rely on low price alone to guarantee its success.

Installation is relatively straightforward and if you've used any recent version of Sonar, you'll feel very much at home here.

Audio recording is limited to 24-bit/48kHz, but this should be more than adequate for most people. Up to 32 audio tracks can be used, and there's support for 128 MIDI tracks. These can be used either to sequence external gear or to control instruments that are held in the Synth Rack.

Budding remixers might be disappointed to learn that only one project can be edited at any one time, but this is a limitation that's common to most comparable products. It's worth noting that Sonar and Music Creator 3 share the same file format, which means there's a convenient upgrade path should you outgrow the entry-level application.

MC3 supports both ReWire and all of the popular synth and effect plug-in formats, though support for ReWire apps and VST plug-ins is offered via a wrapper (this makes them appear as if they were DXi plug-ins).

While it's not a big hurdle for experienced users to negotiate, the wrapper does introduce an extra level of complication and confusion, and this could be a slight problem for beginners.

ReWire applications and synth plug-ins are loaded into the Synth Rack and driven by normal MIDI tracks. While this makes conceptual sense for musicians who are used to working with external MIDI gear, it represents another unwanted complication for new users.

A more intuitive solution would be to have software instrument tracks that synths could be loaded into. Rather more seriously, the Synth Rack is limited to holding just eight synths or ReWire devices, and this could be a fairly major limitation if you're looking to work in an entirely software-based studio.

Thanks to its support for Acidized WAV files, MC3 also has something to offer those who want to make loop-based music. Furthermore, the bundled SamplePort plug-in can be used to quickly navigate, audition and add loops and sounds to a project from an online sample library.

Although great from a convenience and usability point of view, SamplePort is actually quite expensive to use (you have to buy extra sound credits once you've used the ten that come included). It's a shame that SamplePort can't be used to catalogue and access your private sample library.

Music Creator 3 features 18 audio effects. Most of these are of acceptable quality, but some are missing important controls and the user interfaces could be improved. Fortunately, there are plenty of effect plug-ins out there, so it wouldn't be hard to remedy this situation.

Several synth plug-ins are also included, though some of these are just demos. You do get full versions of Edirol's Virtual Sound Canvas (a General MIDI-compatible sound module)and the Dreamstation synth, but unfortunately both of these have been around for a while and are starting to show their age.

Once finished, a project can be mixed down to an audio file at the click of a button, but the MP3 export encoder is only a 30-day demo. Again, you could work around this by downloading a freeware app, but this wouldn't integrate directly with MC3.

Although it has some decent features, Music Creator 3 isn't the perfect beginner's solution. GarageBand has set a new standard at the entry level, and elements of MC3 are confusing, over-complicated and unintuitive when compared to Apple's benchmark. The video tutorials certainly help, but don't completely solve the problem.

Bearing this in mind, MC3 is probably most suited to experienced users (particularly those already familiar with Sonar) who are short on cash. It's not ridiculously complicated, but nor is it instantly accessible.