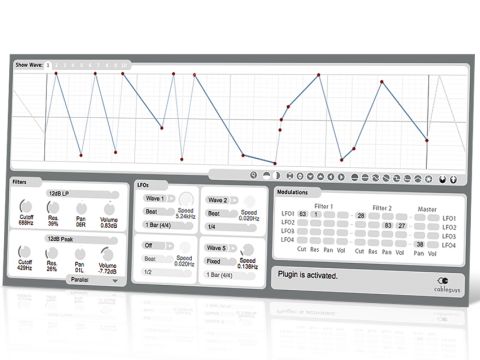 FilterShaper 2 offers a neat concept and is not without its merits, but it could be so much more with a few further tweaks.

Modulation, movement and all things wobbly are en vogue right now, with LFO-heavy genres like dubstep showing no sign of bowing out any time soon. So it seems that Cableguys' FilterShaper 2 has arrived right on time.

FilterShaper 2 is a filter plug-in that enables you to draw complex curves that can be used as waveforms for the LFOs. You can design up to ten custom waveforms (per patch) using breakpoints (similar to drawing automation curves in a DAW), and select one of these for each of the four LFOs. The latter can then be made to modulate the cutoff, resonance, volume and/or panning of the two onboard filters.

The two filters in FilterShaper 2 are identical. They boast ten filter modes, spanning low-pass, high-pass, band-pass, notch and peak filter types, and three octave slopes. The response from each is pretty standard, although they can sound shrill when the resonance is cranked up - we'd prefer a throatier, fatter sound.

The LFOs each have independent speed settings, in beats/bars or Hz. This is standard fare, but you can set the LFOs to go very fast indeed, giving vocal/ring mod sounds as you push it into the audible range. Check out the first half of our dubstep bass example to hear this in action:

FilterShaper 2 has two ­filter chain modes: serial (one after the other) and parallel (side-by-side). The fact that you can assign the same complex ­filter curve to both f­ilters makes the two modes really useful. Check out dubstep bass example above again for an example of serial use - we employed a complex waveform to modulate the cuto­ff of filter 1 in 12dB LP mode for a standard wobbly bass, then sent that same waveform to ­filter 2 in 12dB peak mode to accentuate the sweep even more.

In parallel mode, the two f­ilters run alongside each other and you get individual volume and pan controls for each one - check out this filtered drum loop where we've used the same curve to modulate a LP ­filter panned left and an HP ­filter panned right:

You can, of course, send di­fferent curves to each f­ilter, if you like, or simply use one ­filter on its own.

The four LFOs can each control the cutoff and resonance of the two filters, as well as volume and pan controls, and the routing for most of this is handled by the Modulation Matrix. It's a fairly plain grid-based affair, but it's quite fiddly to use, compounded by the fact that the LFOs themselves aren't actually labelled numerically.

As for the waveform editor itself, the breakpoints come in three degrees of strength, with the softest enabling you to create smooth, sweeping curves, rather than harsh angles. You can use up to 20 breakpoints per envelope but no more. This limit is rather unfortunate - it's not nearly enough for creating intricate dubstep bass modulations, to name just one example.

Another major gripe is the fact it's difficult to work out how your curve correlates to the metre of the piece. Three gridlines at 25%, 50% and 75% of the way along the X axis suggest an understandable leaning towards 4/4 time, but changing the LFO speed to 3/4 (for example) means that gridlines now occur on every dotted quaver - not a particularly intuitive 'guide value'. Being able to change the grid to musically sensible values (8ths, 16ths, triplets, etc) would vastly improve usability here.

As a final thought, we're disappointed that FilterShaper 2's LFOs can't send out MIDI CCs, as it'd be great to be able to control the parameters of different plug-ins using those nifty modulation curves. Adding this feature, along with fixes to the points we've mentioned above, could transform FilterShaper 2 from a decent but flawed filter into an essential LFO modulation solution.

Hear more of FilterShaper 2 in action: