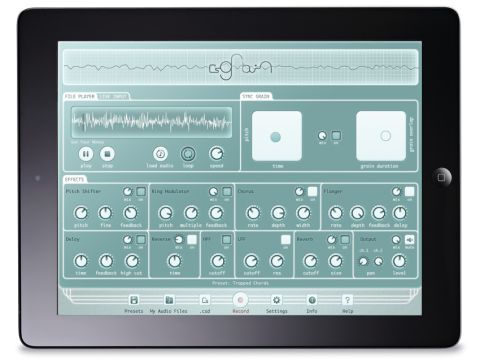 This is one of the coolest, most powerful iOS music apps we've come across in a while.

In case you don't know, the open-source Csound is one of the original synthesis and DSP languages, and the spiritual predecessor to the higher-profile Pd and Max. For those who want to get truly technical, the actual .csd document that powers csGrain is included.

It might all sound complicated, but csGrain is quite straightforward. An audio input - either live via a mic, imported into the app or loaded from your iTunes library - is first fed into SyncGrain, a granular processor with a pair of X/Y pads affording 'fingers-on' control over various grain parameters.

The SyncGrain-processed signal is sent in parallel to nine further effects (Pitch Shifter, Ring Modulator, Chorus, Flanger, Delay, Reverse, HPF, LPF and Reverb), mixed at the final output. Each effect can be bypassed and features between one and four editable parameters plus a Mix knob - just enough to strike the right balance between ease of operation, serious sound design and the fun factor.

A compressor is on board for processing live input (but not audio files, strangely). Brilliantly, each knob can be randomly modulated, turning between user-defined min and max values at a user-defined speed, either smoothly over a period of time or in instantaneous jumps.

It's all geared towards real-time performance, with the app's results generally landing in the 'soundscape' pot but spanning a full gamut of flavours, from delicate and fragile through dark and moody to hectic and terrifying. Your performances can be recorded as WAVs and exported via AudioCopy, DropBox and email.

Any issues? Well, the bypass buttons look active when they're not, which initially confuses, and original iPad owners don't have enough junk in their trunk to handle csGrain's demands.