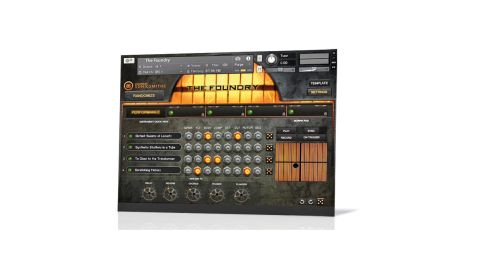 If soundscapes, textures, ambiences, rhythmic beds, impacts and FX rather than basses and leads, are your thing, this is a powerful tool to have at your disposal.

Working in partnership with this, the Templates menu is home to a range of general modulation and processing setups that further shape the patch - Hard Attack, Pulsing Slow LP Filter, Rise 2s, etc. The idea, then, is that you make your own patches from scratch starting with these two systems, rather than trawling through presets - indeed, there are no presets. You can also randomise effects assignments.

At the centre of a Foundry patch, then, are four of the aforementioned sample layers, each with its own key and velocity range, chosen from an extensive library of colourful and diverse instrumental sources (acoustic, electric, electronic,percussive, vocal, found, modern, retro... the lot) and mixed using an automatable XY pad.

Each layer has its own series of effects, including step sequencer, granuliser, 'Body' convolution, compression, distortion and a very deep filter bank, while theMaster FX cover the more conventional likes of Delay, Reverb, Chorus, Phaser and Flanger.

Despite the focus on randomisation, a good level of control is given over all of these modules and parameters, so you can actually get much more hands-on than it might at first appear.

It's a bit annoying that you can't change the four core instruments from the Performance page, the undo/redo system only applies to the patch Randomize button rather than manual parameter changes, and the interface is rather fiddly in places.

However, the source material is superb and patch generation works well, even if the results don't always tally with the selected adjectives.

The Foundry is clearly designed for soundscapes, textures, ambiences, rhythmic beds, impacts and FX rather than basses and leads, and if such things feature in your music at all, it's a powerful tool to have at your disposal.