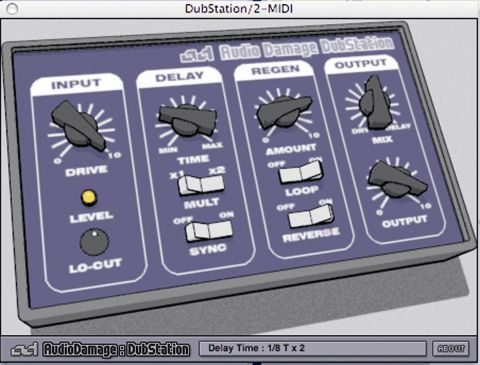 Don't be fooled by the price - DubStation is a superb retro classic!

The first thing to mention about DubStation is that GUI - ain't she abeauty? Cell shading is a graphical process whereby 3D images are made to appear 2D while retaining their 3D properties.

In other words, it might look like a flat drawing, but the knobs and switches are all animated in true 3D. Very cool.

The old analogue delays that DubStation emulates work by passing the input audio along thousands of circuit cells, each one adding a very short time delay to the output signal.

Unlike with digital delays, this architecture results in some sonic degradation between the start and end of the delay line - a 'warm' degradation that is seen as desirable, and remains a signature of dub reggae in particular.

DubStation is pretty light in the controls department, keeping user-friendliness high on its list of priorities. The Input and Output dials can be overloaded by 3dB, and the input stage features soft clipping, which adds a bit of pleasant saturation when pushed.

The Lo-Cut knob controls a high-pass filter that attenuates the low frequencies of the input signal, with a range of 100Hz to 1.5kHz.

This is there to facilitate the rising filtered delay sound characteristic of deep Jamaican dub, which DubStation does very well.

The delay time is set using the Time knob and the Mult switch: Time sets the delay between four and 1,000 milliseconds, or to the usual range of musical intervals with the Sync switch engaged, while Mult multiplies the delay time or interval by two when in the x2 position.

As the delay time gets longer, the high frequencies of the delays are attenuated more - a deliberate take on the aforementioned degradation of the 'bucket brigade'.

Of course, an analogue delay isn't much use without a feedback control, which in this case has been dubbed Regeneration.

This feeds the delay back into itself and ultimately creates infinite repeats when fully clockwise. The Loop switch disengages the Regen circuit and simply loops the contents of the delay line in a digital fashion, with no degradation.

Finally, the Reverse switch causes the contents of the delay line to play backwards for as long as Regen or Loop keeps it in alive, while anything not already in the line when the switch is flipped plays (and delays) normally.

DubStation fully captures the fun and 'spirit' of the grand old analogue delay, and thoroughly deserves the 'Dub' in its name.

MIDI CC control is supported and easily set up, and this is one of those plug-ins that you really have to operate via hardware to fully appreciate.

It sounds fabulously warm and trippy, and at this price is an absolute steal. So, if you've ever resorted to complex mixer routings - real or virtual - in order to construct dirty, evolving dub delays, your prayers have just been answered.