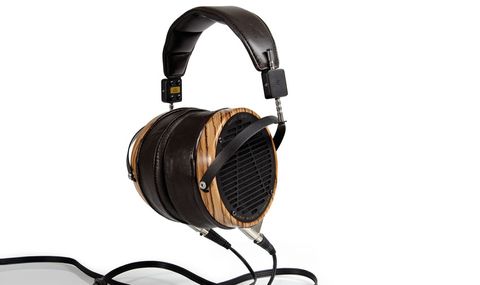 A gloriously luxurious pair of headphones that ooze quality and refinement.

A large amount of impressive technology passes through the Future Music office. With such an eclectic mix of stuff there's always one or two of us that will put a new item on our personal wishlist. It's pretty rare, however, that something has us all drooling. The Audeze LCD3 headphones are one such item.

Whatever style of music you make, you want to be able to hear it as accurately as possible and for many of us, headphones are the weapon of choice. So what makes these special?

Planar technology is fundamentally different to any other type of speaker technology as it uses a flat, lightweight diaphragm suspended in a magnetic field, rather than a cone attached to a voice coil. The diaphragm has a circuit pattern etched into it. When energised, that causes the diaphragm to move in the magnetic field.

A much larger amount of surface area is directly engaged in physical movement, which results in very low distortion characteristics and, because it can be extremely thin, a very high transient response. Heat is dissipated over most of the surface area so 'burn-out' at high levels is far less likely.

Audeze has developed its manufacturing processes to the point where almost every driver is identical so left-to-right balance is incredibly even. These extremely thin diaphragms are also incredibly efficient, so they can be driven by a very wide range of amplifiers. In practice, it means they will work well with anything from a high-end heaphone amp to an iPod.

The LCD3s are very impressive to look at and quite weighty - almost twice as heavy as our Sennheiser HD650s. They are principally made from zebrawood and lambskin leather. The padded headstrap is of the same leather and they are extremely comfortable to wear, which is handy as once you hear them you won't want to take them off.

The two cables supplied connect at the headphone end using mini XLR plugs (which are excellent) and have either 1/4" jack or XLR at the other. No 3.5mm here, but if you can pay these prices then you can afford an adapter.

The first thing you notice with the LCD3s is the bass response. It's really well balanced and they go down to the very lowest point. The second thing is the spatial response - to say that they have a large and accurate soundfield would be an understatement. This reviewer has had the pleasure of using a lot of high-end headphones over the years and these are amongst the best.

They are precise in frequency range and transient response and incredibly even at all volume settings. The detail they are capable of delivering is nothing short of astounding and the warmth of the sound is sublime. It's like being cocooned in your own, personal, musical world.

Of course, they are outrageously expensive, but then real quality always is. As with exceptionally good loudspeakers, the LCD3s suit any style of music and give you an accurate picture of what you have recorded, but beyond that they sound good enough to inspire you, and that's priceless.