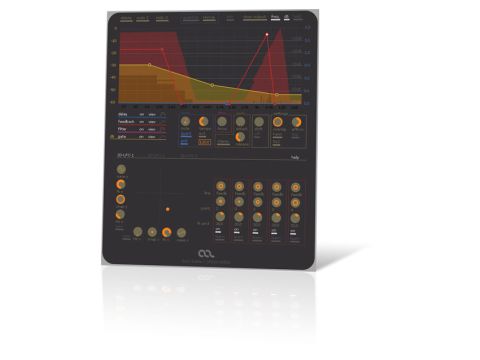 Spectral effects are nothing new, but Obelisk's implementation makes it a joy to use, and a musical one at that.

If you're the kind of musician who shies away from getting any more adventurous with effects than the occasional dash of delay and a bit of chorus, you can probably stop reading now.

However, if you think effects are meant to do much more than just spice up tracks and should, in fact, be called upon to totally transform your sounds, then read on (and have that credit card handy).

Essentially, Obelisk splits the incoming signal into 256 or 512 individual frequency bands. Each of those bands can be processed with its own delay, filter and noise gate.

That in itself ought to be enough to tantalise the tweaker in you, but it's only the start. Each effect is represented as a coloured line in the Analyzer Point View, which is a sort of spectral inspector that displays the incoming or outgoing frequencies, level, beat grid (for the delay) and more

Effects can be edited by creating and moving points on the coloured lines representing them. Because the frequencies are displayed in a graph underneath, it's quite easy to get a visual handle on what you're doing. There are also global editors for the various processors.

As you'd expect, delays can be synchronised to host tempo, though it's a lot more fun to let them fly wild and modulate with one of the 2D LFOs.

There's a dedicated Feedback line in the Analyzer Point View that can be manipulated with the same ease as the delay Time line. This is a great source of entertainment, though it can easily get out of hand. Thankfully, Artificial Audio has provided a Rescue button to clear the delay buffers, putting an end to any runaway feedback.

The filter is seemingly quite mundane until you realise that any filter mode or combination of modes can be created by clicking and dragging in the Analyzer Point View. In actuality, the filter is more like an individual volume control for each of the frequency bands. It's easy, intuitive and highly effective.

The Gate line offers, as you've probably guessed, a noise gate with individual threshold control for each band. Any signal above the threshold at a given point gets through. This is a fantastic sound-shaping tool that works incredibly well with sustained audio. Attack and release times are defined globally.

Finally, Spectral Shift enables you to move the frequency bands up or down before they're returned to the signal path. This is a very strange effect that will suit experimentalists well.

Obelisk is infused with ingenuity. It's the sort of plug-in that can engender entirely new ideas from even the most mundane source. Unlike some experimental effects, Obelisk is no mere mangler of material. The results can be both rhythmic and tuneful. Even the dullest drum beat can be transformed into a skittering trance pattern or dub rhythm.

There are a few niggles; some gate patches load slowly, so skipping through presets in real time isn't feasible, and the plug-in also has an inherent latency of 1024 samples.

Still, these are minor complaints considering the complexity on offer, and latency is part and parcel of such spectral, FFT-based processing. Artificial Audio is fairly new to the game, but, thanks to Obelisk, it now has our attention.