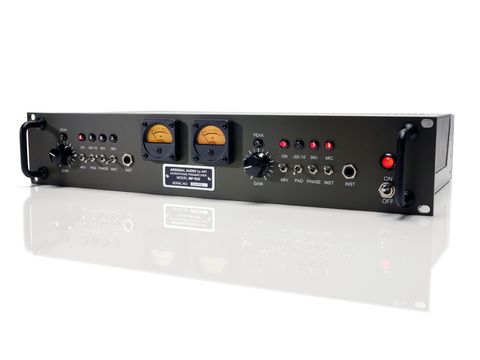 Two channels of transparent quality that will let you really hear what your mics are doing.

Arsenal Audio has been launched by API to provide audio tools that can reach a lower budget while still maintaining the no-compromise aesthetic of the mother brand.

The R20 is a 2U rackmount unit that carries the Arsenal Audio military green fascia with two sturdy handles and a pair of VU meters. There's one gain knob, four switches and a 1/4-inch TS instrument input socket per channel at the front, with an XLR mic input and parallel XLR/TRS line outputs at the rear.

There is nothing but the battle-ready essentials here and, as with the R24 EQ, you wonder if something more refined lies under the hood.

The R20 is a solid state amplifier based around the latest THAT Corp op amps. Most API units use the famed 2520 discrete op amp, which is where the Arsenal Audio range differs.

The THAT Corp 1512 used in the input section is stated as having near discrete performance - ie, similar to what is achievable with a circuit using individual transistors and passive components. Though many standard op amps (ICs) possess adequate performance, the high demands of microphone signal amplification can push them to their limits with regard to frequency bandwidth, linear gain ranges and signal to noise ratios.

Using a specialist op amp such as the 1512 can pay dividends for the delicate and precise needs of the mic preamp. The output of the R20 also utilises a THAT Corp IC (the 1646) to balance the amplified signal for line level connection.

The controls for each channel are simple. First off, there is a continuously variable gain pot which sweeps through 46dB of gain for the mic input and 21dB for the instrument.

Above this is a peak LED which lights as the amplification level reaches into the realms of distortion. The intensity of the LED relates to how far into distortion the signal has gone, which is a lot more useful than simply lighting up as the signal clips.

The row of four switches to the right of the gain knob control +48v phantom power, the -20dB pad (-10dB for instrument input), phase inversion and input source (mic or instrument).

The LED above each switch indicates their 'on' or 'up' state - simple. Next to the switches is a 1/4-inch TS instrument input. In the centre above the military dog-tag name plate are the two tank cockpit style VU meters. The components and controls used could be condensed into a 1U rack unit with smaller VUs, but the martial aesthetic would be lost, and there's nothing like knobs and switches with a good bit of finger space around them.

Considering the look of the Arsenal Audio range you would expect a heavy, gritty Rock 'n' Roll sound to match, but here the sound deviates from the image.

Behind a bomb-resistant 5mm thick front plate the clutter-free circuit delivers a clean and tonally transparent signal path. Despite the conservative 55dB of mic gain there is noticeably high headroom coupled with a distinctly unnoticeable noise floor. Even when the peak LED flashed 'alert, distortion imminent', we could not detect any audible signal clipping.

Having tried a large range of microphones (ribbons, dynamics and condensers, old and new) it became apparent that the R20 excels at allowing the qualities of the mic to take precedence.

Though many manufacturers are including variable input impedance to help match the enormous range of mic outputs that populate modern studios, the fixed 6.8kOhm used here only had us maxing out the gain on a few old dynamics and ribbons, though their frequency responses remained intact and unfettered.

The transparent tone of the R20 extends across the audio frequency spectrum and we could find no audible evidence of roll-offs at the extremes. A massive guitar sound through a Royer R121 came through with a low end to die for and smooth upper frequencies that showed no sign of phase shift even when prodigious EQ was added.

The meaty low-mid response of large dynamics such as the Shure SM7 did not require a little EQ as they so often can. Even a cheap condenser with some harsh upper mids seemed to come through with some of that phasey nasal tone ironed out.

This is a preamp for mic lovers, so if you want to impart some extra character with the preamp then this is not the unit you are looking for.

The instrument input possesses plenty of clean gain and with enough headroom to take the dynamic range of troublesome sources such as a high output active bass played slap-style. The frequency response is again wide ranging and smooth, leaving the instrument's tonal character intact.

We have come to expect a lot from devices as simple as the mic preamp, with manufacturers offering ever more elaborate functionality to tempt the cash from our pockets. The R20 resists this temptation and concentrates on the job in hand, but there is one option we missed. A high-pass filter is conspicuous by its absence, especially as the low frequencies come through in such pure form.

A perfectly decent two-channel mic preamp can be bought for less than £1,000, but with the R20, Arsenal Audio is offering a chunk of classy amplification for those willing to make the investment that good microphones deserve.

The wide-ranging tonal neutrality coupled with the high headroom put the R20 in the high-end audio league, where its price could be considered on the low side.

Some preamps suit beefy guitars, some add that something to vocals, while others excel at capturing the high transients needed for drum overheads. The R20 suits almost any use, but what you will be hearing is the quality of your mic and your source. This is where new technology meets old fashioned simplicity in the best possible way.