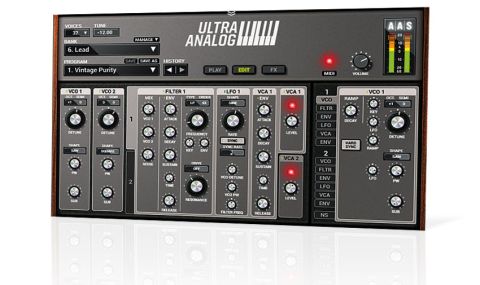 VA-2 is a back-to-basics virtual analogue synth with an awesomely authentic sound, but it doesn't come cheap.

The Americanism "stick-to-itiveness" describes a dogged perseverance, a single-minded dedication to a specific idea. It's a term that could be applied to Applied Acoustic Systems. Its tireless fealty to physical modeling synthesis is admirable, to say the least, and best exemplified in two products: the Tassman modular synth and its analogue offspring, Ultra Analog. Yet even the sternest AAS fan would be hard-pressed to deny that progress in this area for the Canadian company seems to have slowed to a near standstill.

Ultra Analog VA-1 was released some seven years ago, and the last significant update was way back in 2008. Indeed, when we saw VA-1 selling for $15, we feared its lifespan was nearing an end, so you can imagine our surprise upon discovering that a new version of Ultra-Analog had been released, sacrificing none of the original's authenticity, but instead offering new features designed to enhance rather than overwhelm.

If looks could kill

Great care has been given to revamping the interface for Ultra Analog VA-2 (VST/AU/RTAS/AAX/standalone), but whether or not it appeals to users of VA-1 will depend on their appreciation for a multipage window versus the old all-in-one affair. Also, the GUI is quite small now, although the knobs and legending are a bit larger than those on the original.

The upper third of the interface houses basics like volume, patch selection and metering. The lower section switches between three separate pages: Play, Edit and FX. The first of these provides access to performance functions such as Unison, a brilliant arpeggiator, and a few basic effects controls. The Edit section opens to reveal the oscillators, filters, envelope generators and LFOs.

For those not familiar with Ultra Analog, its architecture is based on twin signal paths - two oscillators, two filters, two VCAs... you get the picture. Basic controls are always visible for the oscillators, while the two filter/LFO/VCA paths are selected using the big tabs in the middle.

Another tabbed section on the right brings up further 'detail' parameters for each section, as well as repeating the basic ones (enabling you to keep one section of your choice from oscillator path 1, say, in view when path 2 is selected in the central section). The core synthesiser hasn't really changed, but then, adding a swathe of new features would diminish one of Ultra Analog's selling points: its simplicity.

The effects, on the other hand, have been given a serious makeover. There's a quality EQ and compressor section, followed by two re-orderable multieffects slots into which you can load vintage chorus, delay, phaser, flanger, distortion, wah, auto-wah or notch filter. Finally, the hardwired reverb at the bottom of the rack has been much improved since VA-1.

Sonically, Ultra Analog is as convincing as ever, and v2 doesn't sacrifice its back-to-basics approach. You'd be hard-pressed to get lost, and the excellent user manual will be little more than a gratuity to all but the greenest synthesist.

Is it worth the asking price? Just about, yes, although competition is fierce. VA-2's simplicity and presets make it appealing to less seasoned synthesists, while its sound quality will draw in the diehards. Upgrading from VA-1, meanwhile, is a no-brainer, given AAS's very reasonable upgrade price.