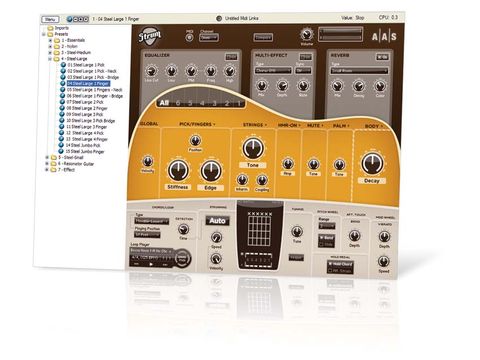 If you want acoustic guitar without using samples or recording the genuine article, Strum Acoustic is a decent buy.

Strum Acoustic GS-1 is a physically modelled simulation of an acoustic guitar combined with a MIDI processing system that's designed to make it easier for keyboard players to create convincing guitar parts.

The easiest way to play Strum Acoustic right off the bat is to use Auto Strumming mode, where the plug-in automatically translates the MIDI input using whichever strumming 'style' is selected in the instrument's Chords panel. Options include movable, open and drop voicings and a choice of playing positions.

Deactivating Auto mode brings Strum Acoustic's 'strumming keys' into play. These work like the key-switching features on some ROMplers. In this mode, a chord is held down with the left hand, while the right hand is used to 'strum' the virtual instrument by rhythmically tapping at 14 notes that are assigned to different techniques, including palm-muting and arpeggios.

Playing chords and strum notes can feel unnatural at first, but the instrument includes a built-in MIDI player, which can make this easier for beginners.

This comes with loops of two varieties: with chords and without. The former include chord and strumming note data, and when these are played back, the instrument essentially plays itself.

More interesting are the loops without chords. With these, the user provides chords in real time via a MIDI track or controller, and the loops take care of the rhythmic strumming. It's analogous to holding down chords on a guitar with your left hand while someone else strums the strings for you. This makes it much easier for inexperienced users to play the instrument.

The manual features simple instructions for creating you own MIDI loops, so you can make chord sequences and play the strumming part instead, and includes tips for getting the most authentic-sounding results.

You can control the speed and velocity-sensitivity of the strumming from the instrument's interface, and there's also MIDI learn capability. Pitch modulation can be applied using aftertouch or your keyboard's mod wheel.

Because Strum Acoustic relies on physical modelling rather than samples to simulate the sound of a guitar, you can tweak the tonal characteristics of the instrument via parameters such as string tone, body decay and pick/finger stiffness. More adventurous users can bring up controls for every string, and with dozens of variables available, it's possible to customise the instrument to an astounding degree.

It's also possible to select from a variety of ready-made preset guitar profiles, including steel and resonator categories, and the instrument features an effects section that boasts choruses, delays, flangers and more.

If a palette of realistic guitar tones appeals more to you than the clever strumming features, you'd be much better off with a guitar ROMpler, as GS1 can sound a bit 'General MIDI' at times. Ironically, given the plug-in's name, we think it sounds a lot more convincing on single-note lines than when strumming chords.

It's also a little disappointing that the plug-in can't output its revoiced MIDI, as it could then be used to power any other virtual guitar instruments you've got - that feature alone could be a prime selling-point for some.

Still, for generating authentically-voiced acoustic guitar parts with a minimum of fuss, Strum Acoustic GS-1 does the job admirably.

Here are four examples of Strum Acoustic being 'played':