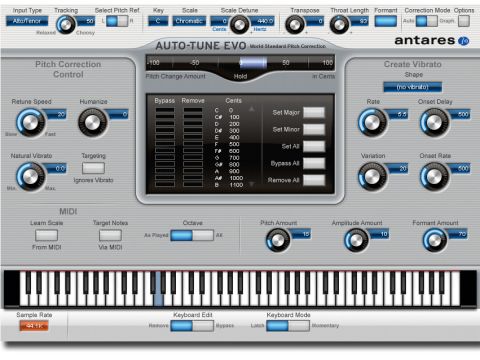 Over the years, other companies have taken shots at creating alternative tuning products, with varying degrees of success. Antares, meanwhile, has continued to develop a variety of (mostly vocal-orientated) effect plug-ins, including new versions of Auto-Tune, raising the bar a little each time.

In recent months, Auto-Tune has enjoyed a surge in popularity, with artists such as T-Pain relying on it for their signature sounds.

Auto-Tune Evo represents a jump forward in functionality. All the familiar features remain intact, of course, including highlights from Auto-Tune 5 such as the Humanize and Natural Vibrato controls.

Many features have been vastly improved, too, the most impressive being note-based graphical editing, which addresses the often fiddly nature of pitch editing in previous Auto-Tune incarnations.

Auto-Tune Evo certainly pulls no punches and is noticeably more accurate than previous versions, and over a broader variety of signal sources, too. For example, earlier Auto-Tunes sometimes had trouble with octave tracking, resulting in nasty side effects.

And while vocals are the main focus, other monophonic instruments are also catered for - including bass - by way of the Input Type control.

Working with Auto-Tune is now much quicker in the classic Auto mode, but the improved pitch tracking is perhaps even more essential in the offline Graphical mode. Instead of snapping to a predefined musical scale, this plots a clear graph of time against pitch, known as the Pitch Graph.

This shares many common controls with the classic Auto mode, such as the key/scale, throat modelling and transpose settings. However, whereas in previous versions you edited a continuous line representing frequency, Evo can make musical sense of the content and present it to you as Note Objects - it's like a monophonic piano roll for audio, which will be familiar to users of Celemony's Melodyne. The editor has its own unique set of controls, which vaguely resemble Melodyne's.

To get started, click the Track Pitch button and play back the section of audio to be processed. The Pitch Graph generates Evo's interpretation of the pitch, represented by a red line. Clicking the Make Notes button creates Note Objects based on the original pitch contour, using bold white blocks to indicate where each note falls.

You can then make virtually unlimited adjustments to the tuning using dedicated tools. Correction Curves and Correction Lines can also be used for wilder adjustments or for designing transitions between Note Objects.

Once you've made your tweaks, you'll see three contours: the original tracked pitch, the Correction Object pitch and the actual output pitch (the latter is new for Evo).

Because Evo synchronises playback with the host sequencer, it's a lot like having an extra editing window in your DAW. Professional results are very easy to accomplish using this system, especially as it allows free copying and pasting of Correction Objects. This means that you can repeat corrections elsewhere in the project.

Simple pitch corrections are a doddle and unruly effects just as quick to create. There's even a window resizing function for the Pitch Graph mode; unfortunately, like the synchronisation feature, this only works in compatible hosts.

At the time of writing, our test host (Cubase 4) didn't support real-time window resizing, although the default is reasonably sized and it's possible to configure custom sizes from the Options menu.

Other key new features include an automatable transpose control for pitchshifting the output by up to an octave in either direction, and formant correction, which gives more natural results when shifting vocals by a large amount.

There's also a throat modelling feature: activate the Formant switch to use the Throat Length dial. A smaller vocal tract sounds more feminine or child-like, while a larger one sounds more masculine. Slight changes in either direction go a long way, but insane creative effects can be had with extreme settings.

It's clear that Antares has worked hard to make Evo compete with the rivals that have popped up over the years. Although Celemony's impressive-looking polyphonic Melodyne DNA technology is about to debut, it remains to be seen whether it can oust Auto-Tune from the monophonic throne, especially when it comes to handling those all-important vocals.

Celemony speculation aside, then, Auto-Tune Evo does its job remarkably well and sets new standards for vocal processing. It's stable, tidy, flexible and sounds simply awesome.

Listen to what Auto-Tune Evo can do to a vocal