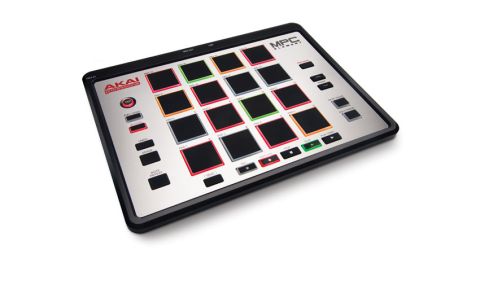 Element is a brilliantly mobile MPC at a crazy price that any producer could fall in love with.

Despite inventing the groovebox concept in the first place, it took Akai a while to make the leap into hardware-software hybrids, but the results - particularly the flagship MPC Renaissance - have been met with widespread acclaim.

With its small footprint and low profile, the latest addition to the roster, the MPC Element, recognises the continuing supplementation of desktop computers and even laptops with iPads and other tablets, but is it a shrink too far?

The MPC Element is a USB-powered pad controller that hooks up to your Mac, PC or iPad (via Apple's Lightning/Dock Connector to USB adapter for the latter). It includes a serial number for the downloadable MPC Essentials, a cut-down version of the MPC Software that comes with the MPC Studio and Renaissance.

MPC Essentials runs as a standalone app with AU/VST plugin support, or as a plugin instrument itself (AU/VST/RTAS). In typical MPC style, it gives you all the functionality you need to construct entire tracks.

The standalone version can host virtual instruments, but only one per project, sadly. Far more usefully, you can load and play pitched samples chromatically on the pads, so melodic riffs and basslines are possible.

You can load and edit kits and samples of your own or from the bundled library, and with up to eight banks of 16 pads available, you're unlikely to run out of triggers. Each pad features a filter, amplitude and filter envelopes, tuning and LFO modulation of pitch, pan, amplitude and filter, as well as sample editing and slicing. Multisampling is limited, though, with a maximum of four velocity layers per pad, so like all MPCs, totally realistic instrument emulation isn't on the cards.

Effects-wise, you get four inserts per pad, into which AU/VST plugins and a range of onboard effects (including all the usual suspects and a particularly nice bitcrusher called Decimator) can be loaded. Expect to handle mixing and mastering in your fully equipped DAW, though, for reasons we'll make clear soon.

In general, MPC Essentials is very useable, although more basic and less refined than, say, Maschine (particularly with its recent v2 update). One notable shortcoming is the lack of real-time global swing control for playback - instead, you have to add shuffle by applying quantise/swing as an offline process. Nor does it have the most beautiful interface we've ever seen. That said, it does what it does well, and the MPC software in general has a loyal fanbase because of it.

On to the MPC Element itself, then, and from the moment you flip open its stylish protective lid, it feels absolutely awesome in the hand - so solid and aesthetically pleasing, in fact, that you can't help wondering how on earth they can afford to charge so little for it.

Make no mistake: these are the finest feeling drum pads we've experienced at this price or anything near it. And they don't just play great, they look great, too - solid black, edged with backlit trim that shifts from amber to red the harder you hit them, and glows green in certain editing modes to indicate pad selection.

Of course, the first consideration with any musical equipment is the playing feel and results, but having grown so used to matt black plastic on our grooveboxes, there's something hugely alluring about the shiny metallic fascia of the MPC Element.

Below the pads are a set of standard transport buttons, and to the left are the performance controls that will be familiar to any MPC user. Full Level boosts all input notes to full velocity, while 16 Level lets you play a single sample transposed up and down the pads, or at 16 velocity, attack, decay, layer or filter cutoff settings.

Then there's the famous Note Repeat button: hold it and a pad down to trigger a series of automatically repeated notes at the currently selected quantise value, enabling rolls and effortless input of regular beats and sounds (16th-note hi-hats, for example). The option to have Note Repeat work as an on/off toggle, rather than having to hold it down, would free up another valuable finger, but it's still a winner. Undo and Erase buttons complete the left side of the interface.

On the right-hand side is the Pad bank selector for toggling through the eight available banks, as well as Track Up and Down and Mute/ Solo Track buttons that cycle through and operate on multiple instances of the MPC Essentials plugin in a DAW. All the basics are there, then, but we'd love to have seen quantise value buttons in this section for quick-hopping through Note Repeat rates.

Another welcome feature is the traditional 5-pin MIDI I/O via mini-jack adaptors, but there's no audio I/O, which will be a disappointment to some - until they see the price, we'd hope. Another mild downer is that when using the Element as a basic MIDI controller, you get no visual feedback from the LEDs.

On the whole, the MPC Element is an incredibly well-built bit of hardware coupled to a very capable groove production app/plugin. It is very basic and doesn't really begin to compete with the likes of Maschine, Ableton Push or any of the larger MPC controllers, but if you're after extreme portability or just a set of truly superb drum pads to add to your studio at an unbeatable price, it could easily be described as an essential purchase.