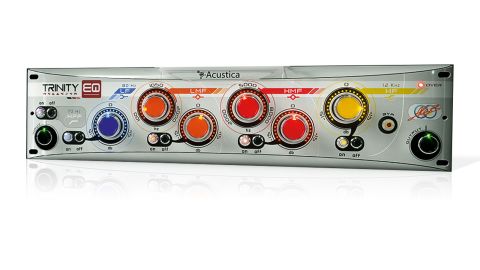 We might not know exactly which console EQ it's emulating, but we do know that Trinity sounds beautiful.

The press releases are cagey. "A coveted and highly sought out British console equaliser" is all they say. Because Acustica's Acqua engine works its emulating magic by effectively sampling the effects of actual hardware, we know it must be based on some historically significant desk, even if it isn't obvious which one.

Trident, maybe? The controls don't quite match up. Neve? Likewise. A number of legendary mixers have been designed in the UK over the years, and this one has the distinctive flavour of a solid-state unit.

Not that any of that really matters - what counts is how it sounds and what you can do with it. Like the Acustica Audio Cooltec EQP1, Trinity is based on the VVKT (Vectorial Volterra Kernels Technology - a sort of multisampled impulse response system) that powers Acustica Audio's flagship Nebula series. But while the EQP1 took the functions of the modelled EQ and rolled each into its own plugin - ending up with a set of seven - Trinity is a one-plugin job.

At the time of writing, Trinity is Windows-only, although a Mac version is said to be in the works (it'll be free if you buy the Windows one). It's a fairly simple affair - a combination of fixed- frequency and parametric equalisation with a seriously retro vibe - and like all of Acustica's models, it imparts its particular character on the signal even if all of the EQ is bypassed, just like a real analogue EQ.

Bands on the run

A fixed 70Hz high-pass filter kicks things off, with no control at all beyond an on/off switch - great for killing low-end rumble but little else. Slightly less limited are the 80Hz low shelving and 12kHz high shelving sections, each of which add +/-15dB gain knobs to those power switches.

This limitation isn't uncommon on older analogue EQs, and these two frequencies are well-chosen and musically useful for, say, shaping kick drums or adding a bit of air, respectively.

Things get rather more flexible with the two fully parametric bands. Low Mid ranges from 100Hz to 2kHz, while High Mid runs from 2-8kHz, and again, each one offers a Gain knob range of -15dB to +15dB. It's these mid-range bands that make Trinity a useful EQ, enabling you to home in on specific ranges for selective boosts and/or cuts, albeit with fixed Q all round.

Nebula users already know how effective Acustica's approach to impulse modelling is - indeed, even the most software-resistant hardware-heads have been known to sing its praises when pressed. Yet Nebula can be very CPU-hungry, so we were pleasantly surprised to find that Trinity is less so, and without sacrificing sound quality.

And on that latter subject, the news is all good: Trinity is pure class. The lows are full and pleasing, and the highs sizzle with just the right amount of emphasis. It isn't perfect - as with other convolution-based plugins, latency can be an issue - but the sound makes up for any drawbacks. This is as authentic as vintage EQ emulation gets.