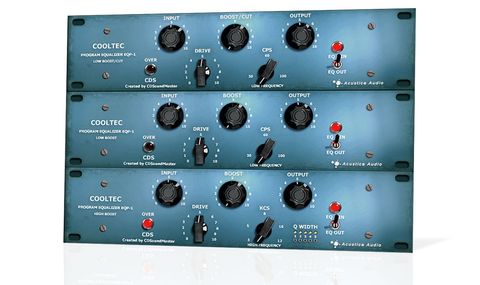 Seven well-crafted plugins modeling one legendary EQ, the Cooltec EQP1 Suite's approach is unusual, but its sound is great.

The name that brought us Nebula, Acustica Audio, returns with the Cooltec EQP1 Program Equalizer Suite - a collection of EQ plugins based around the much-loved classicPultec EQP-1A equaliser.

Few developers are doing more to push the envelope of impulse response-based signal processing than Acustica Audio, the brand behind the awesome Nebula 3 Pro and its 'effects sampler' companion N.A.T. 3.

Indeed, its technology goes well beyond standard IRs and convolution, using the sci-fi-sounding Vectorial Volterra Kernels Technology (VVKT) to allow capture of multiple parameter settings of a processor, not to mention its harmonic distortion, which normal IRs cannot capture.

The new, Windows-only Cooltec EQP1 Program Equalizer Suite (VST) is the result of Acustica's collaboration with CDSoundMaster. Unlike Nebula, which is one interface designed to emulate a diverse range of outboard gear, the Cooltec Suite comprises seven variations on the same meticulous recreation of the legendary Pultec EQP-1A equaliser. It's been built using Acustica's Acqua engine, which enables third- party developers to produce complete plugins with custom interfaces based VVKT.

Each of the seven interfaces is a variation on the same theme, recreating the look, feel (and, hopefully, sound) of the original hardware. At this point, Nebula users might well be wondering if this is a repackaging of the already-available EQP-1A 3S Nebula set from CDS. Not quite - Cooltec models an all-tube Pultec, while Nebula's programs sample a solid-state unit.

Each of the Cooltec plugins serves a specific purpose. One is designed to provide top-end attenuation, while another delivers high-frequency boost; a similar pair work together to boost and cut low end. Then there's a straight-up preamp model with which to apply just the subtle preamp sound of the EQP-1A, with or without the even more subtle sound of the EQ circuitry (as if all knobs were set at 0dB).

The last two plugins are dedicated to Low Boost/Cut and High Boost/Cut respectively, with a single knob boosting and cutting the specified frequencies simultaneously using dual low shelves or a high boost/shelf respectively.

The High Boost and High Boost/Cut plugins also include buttons with which to choose from five Q width settings. All seven plugins also feature Drive, Input and Output knobs, along with an Over indicator for monitoring gain level, and an EQ in/out switch.

The Cooltec Suite successfully captures the sound and feel of the EQP-1A. All of the plugins have a fabulous vintage feel to their sound, with that essential low-end boost being particularly satisfying. They work a treat on drums, where the spit and sizzle of the high-frequency boost is almost magical in its enhancing effect.

The original Pultec was intended for mastering but has found favour as an all-rounder in studios that can afford it, and these plugins could be the next best thing for those that can't. Having one device split up into seven separate plugins might seem like a rather strange and impractical approach - and some won't like it - but there's something to be said for the utilitarian approach of each one doing a specific job. You always know what you're going to get when you call one up.

Ultimately, this is an unashamedly vintage collection with a highly characteristic sound and less flexibility than is offered by more contemporary EQ designs, and indeed, other Pultec EQP-1A plugin emulations. Still, if you like to spend hours untangling the secrets of classic recordings from the 60s, you'll love it. If, however, you're looking for a general purpose, Swiss Army knife-style EQ, this isn't it.