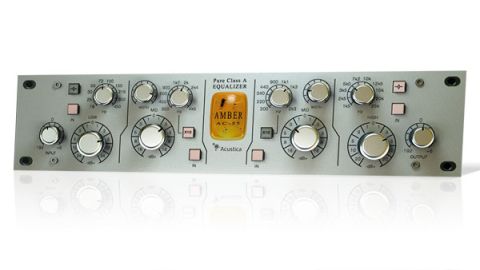 AmberEQ can have an almost magical effect on a mix - if you're able to run enough of them to make it happen.

The effects-sampling pioneer is back with a new Acqua device - an EQ that looks to be based on the revered Avalon AD2055.

As far as algorithmic plugin EQs have come in recent years, Acustica Audio reckons its nonlinear convolution process, which effectively measures and clones the response of hardware, still has the sonic edge. Its Acqua series of standalone plugins make use of said technology, first introduced in Nebula in 2007. AmberEQ (VST/AU) is the latest addition to the lineup, which also includes Titanium, Blue EQ and Cooltec EQP1. Judging by the controls and interface, what we have here seems to be an unofficial virtualisation of the Avalon AD2055 equaliser.

AmberEQ's functionality is limited to the spec of the hardware it mimics, aside from the fact that you can run as many instances as your DAW can handle, of course (more on that later).

You get a low shelf that goes from 18Hz up to 450Hz, two Q-adjustable bands covering the range from 35Hz-23kHz with plenty of crossover, and a high shelf spanning 1.5k-25kHz. All frequency bases are just about covered, then, but obviously Amber doesn't pretend to be a surgical EQ - rather, it's all about that elusive analogue sound...

At first, pitting it head-to-head against a selection of our favourite EQs plugins, we weren't particularly blown away by AmberEQ's sound. However, it soon became apparent that Amber really shines when used on multiple sounds in a mix, either by being instantiated on multiple channels, or applied to submixes or, indeed, the master output.

For such usage, AmberEQ has a little something special up its sleeve in the form of dynamic harmonic distortion, which thickens sounds and imparts a sort of credible sheen that has to be heard to be fully understood and appreciated.

This, combined with the transformer emulation, is what really excites us about AmberEQ, all presumably made possible by the nonlinear convolution process (specifically, Acustica's Vectorial Volterra Kernels Technology - VVKT for short) at the core of the plugin.

The downside is that we were hard pressed to get more than 15 instances with all bands enabled running live in a single project on a 4GHz i7 PC, thanks to its high CPU use.

AmberEQ is a gorgeous-sounding plugin, capable of more than first meets the eye/ear, thanks to the transformer and dynamic harmonic distortion emulation, which brilliantly complement the basic EQ functionality.

The low-noise design of the original Avalon unit made it a favourite for mastering, but with the convenience of being a plugin, AmberEQ broadens its scope for mixing duties.

It's probably not going to be your one and only mix EQ, due to the reasonably high tax it puts on the host CPU, but even a handful of these can add a real sense of depth, life and realism that's atypical of purely 'in-the-box' mixes.