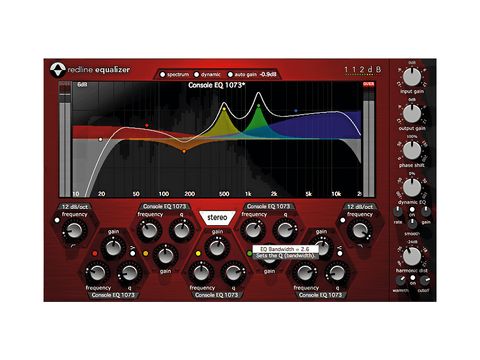 Redline Equaliser is a well thought-out EQ with a unique and comprehensive feature set and a great sound.

We're big fans of 112dB's Redline Reverb, as it brings a lush, musical sound to a saturated market. Now the 112dB has released an EQ, Redline Equalizer, and most impressively, it lives up to the high standard that the company has set for itself.

The centre panel is dominated by a large graphical interface, which also has a useful spectrum analyser option (albeit with a nearly invisible pale grey colour scheme). Below this are the main EQ controls, with a high- and low-cut at either end and five parametric bands in the middle, each offering a more than ample 24dB of cut or boost, with frequency ranging from 10Hz to 28kHz.

You can also set the gain character - ranging from soft to surgical - which affects the interaction between the Q setting and the gain level. This can be handy for gentle sound-altering duties, as opposed to, say, cutting a specific frequency.

Each of the five parametric bands can be set to one of eight different algorithms, most modelled closely on classic kit. These are a basic digital and tube EQ, and modelled versions of six classic units: Neve 1073, 1081 and 1084 EQs, an SSL 4000E and an API 550A and 550B. You can freely mix and match them (eg, use a smooth type for your top-end and a clinical digital algorithm for punchy bottom-end).

One of our favourite features is auto-gain, which balances the volume of the signal so that the perceived loudness is around the same as the bypassed signal. Since a loud signal always sounds 'better' than a quiet one, this feature helps to ensure that the changes you're making are really improving the tone and not just making it sound better because it's louder. Auto-gain isn't perfect, but it is incredibly useful.

"Quite unusual are the Phase Shift and Dynamic EQ sections, both of which offer up a level of control we're not accustomed to seeing."

Quite unusual are the Phase Shift and Dynamic EQ sections, both of which offer up a level of control we're not accustomed to seeing. Analogue EQs and 'normal' digital ones introduce phase shifting, whereby some frequencies are delayed slightly in relation to others - a "frequency dependent delay," as the Redline Reverb manual puts it.

The results of this can be unpredictable, but in general, phase shifting causes a subtle 'smearing' of the signal, especially noticeable on transients. This isn't always a bad thing, and is even partially responsible for 'that analogue sound'.

However, if you want to adjust the frequency content without introducing phasing, you'll have to use a linear phase digital EQ. Redline EQ goes a step further, enabling you to sweep the phase shift from linear (ie, none), through typical analogue emulation… and beyond! The latter extreme won't be useful every day, but it is worth playing with on any rich sound source, as it adds some real character.

Further craftiness comes with the Dynamic EQ section. The best way to describe this is as a kind of threshold for the EQ, enabling you to control when EQ is applied based on the strength of certain frequencies. You could, say, add treble to a vocal track, but when the plug-in detects that the high frequencies are too strong (caused by sibilance, for example) it reduces the boost appropriately.

Easier to grasp is the harmonic distortion section, which offers up three parameters with which to dial in that elusive subtle warmth.

Apart from the obligatory input and output gain controls, that covers all of Redline EQ's main controls, with the only big bit left to explain being Channel Mode. This offers Stereo, Left/Right and Mid/Side modes, the latter of which splits the signal into elements common to both channels (mono/mid) and elements that differ from channel to channel (stereo/side).

This incredibly powerful function enables you to independently apply EQ to the stereo part of a signal and the common mono centre part. This obviously has huge potential for balancing or accentuating aspects of stereo material.

The plug-in also shares some of our favourite features of Redline Reverb, including control detentes (when you move a control, it easily snaps back to its original position - handy if you want to 'abort' a tweak in progress), skins (two of these are supplied), assignable MIDI, adjustable knob-control characteristics and pop-up value displays during editing.

Redline Equalizer represents a landmark release in many ways. It's probably the most feature-packed and original EQ we've ever encountered, and its dazzling array of controls and options are more than just gimmicks - they really do make it incredibly versatile. And more than that, they set a number of precedents for what's possible and what we should expect from future EQ units.

We pushed Redline Equalizer pretty hard and pitched it against our best EQs - we found that the top-end was capable of extreme boost without too much harshness, and that the bass could be pushed hard without losing much punch or definition. And there's a rather large selection of presets, all separated according to suggested use. Obviously, EQ presets will always need plenty of tweaking, but they're a good way to get a feel for the range of sounds available from Redline EQ without having to actually tweak every parameter each time.

Now, whether or not the sound of Redline Equalizer is quite as unique as its options suggest is a little more debatable. It definitely sounds great, and is a fine tool, but much of EQ choice is down to preference, and while useful, some users will still have their EQ of choice.

Our only real complaint is that, as of writing, some users are experiencing slight issues with the plug-in's delay compensation, whereby the wrong latency seems to be reported, making the plug-in's output slightly out of sync. This can be especially irritating on very rhythmic material, but as a short-term fix, it's easily compensated for by using the track delay controls in your DAW. There's an update coming that 112dB say will cure the problem once and for all, so before buying, we'd recommend hanging on for the update, or giving the demo a go to see if the problem afflicts your particular system.

Despite this caveat, we're giving Redline Equalizer full marks, but be sure to try it first, as only your ears can determine whether it's for you. And keep in mind that none of the plug-in's features offer night-and-day improvements alone, but when used wisely together, and with the plug-in placed on a number of channels throughout a mix, its effects can be greatly magnified.

Make no mistake, this is a ground-breaking plug-in that should inspire many imitations.

Listen to what Redline Equalizer can do: