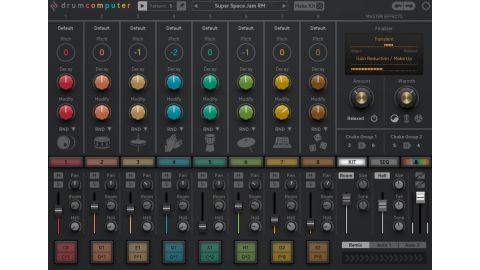 It’s not for everyone, but DrumComputer’s singular sound makes it a fine addition to the software percussion landscape.

In a market awash with hard-hitting sample-based drum instruments, the release of any serious synth-powered alternative is always something to celebrate.

While DrumComputer (VST/AU/AAX/Standalone) does use bits of audio samples as raw sound sources, it’s a synth in the purest sense, and the upshot is a beatbox with real character and personality.

DrumComputer is an eight-channel/engine drum machine with onboard step sequencing. All eight engines are identical in their parameters and layout, and each hosts a trio of drum-specific synth modules, which are blended to make the individual elements of your kit.

All three have a few common controls, including Level, Pitch, Pitch Mod and Decay, and a switch for making the pitch envelope velocity-sensitive, but some of these vary in their specifics between modules.

The Resonator feeds one of four ‘exciter’ signals into a self-oscillating multimode (LP/BP/HP) filter, with adjustable cutoff (Pitch) and resonance, and the Decay knob controlling the exciter/noise length.

The Envelope exciter sends an impulse to the filter, which resonates as a sine wave in response; Noise + Env does the same but with added noise; and Wavetable and Resynth use the output of either of the other two modules as the exciter, whether that module itself is audible or not.

The Partials knob increasingly raises the frequency and volume of two additional voices, while Tone applies a 12dB/octave low-pass filter for frequency sculpting.

The Wavetable/Analogue module presents two oscillator options: an analogue waveform, morphing from sine to pulse, with PWM; or one of an extensive list of wavetables to which you can add your own in WAV/AIF format, with 16 waves extracted from the imported sample.

The waveform or wavetable position is morphed/swept using the central knob, which is of course available as a modulation target (see below); eight invertible pitch modulation/decay envelope shapes are on hand; and frequency and bipolar ring modulation can be brought to bear for ‘metalising’ and inharmonic tonal manipulation, sourced from the Resonator and an internal sine wave oscillator respectively.

Last but by no means least, the Resynth module turns a single-cycle waveform (from the huge included library or extracted from an imported sample) into a ‘noise table’ – a looping wave with no discernible pitch. Set the length and frequency movement of the noise with Decay and Pitch Mod, and dial in a combo low/ high-pass filter with the Color knob, to generate snare sounds, cymbals, shakers and the like.

The three modules meet at an effects section, where a multimode (including Vowel) filter, compression, distortion and two bands of EQ are applied. And when you’re stuck for ideas, randomisation of any individual engine or the whole kit is a click away, each Engine’s Profile setting guiding the randomisation to keep it within the sonic bounds of a particular drum type – Kick, Snare, Clap, Perc, Hat, Cymbal or Synth – should you so choose.

Levelling, panning, muting and soloing of the engines is done in the Mixer section at the bottom, which also houses auxiliary Room and Hall reverbs. Multiple outputs to the host DAW are provided, too, for external processing.

• XILS-lab StiX
Powered by an extensive roster of synthesis techniques and sampling.

Each DrumComputer engine packs in a surprising amount of modulation into its central strip. Two Modulation Generators serve as envelopes or LFOs, assignable to two parameters each from their own control panels; and a four-slot modulation matrix enables a wide range of sources (MGs, sequencer, the audio output of each module, MIDI data, randomisers, etc) to target any four parameters from that engine.

It’s an incredibly flexible setup with which a huge degree of automative control can be imposed on the eight engines – although with modulation only visualised for the Wavetable/ Analogue module’s waveform, the system falls slightly short of the mark in terms of intuitiveness and navigational workflow.

We’re almost out of space, so let’s wrap up with a quick run-down of DrumComputer’s other notable features. The Kit page gives access to the Pitch, Decay and Modify mod source controls for all eight Engines at once, as well as choke groups and a useful Finalizer effect (transient shaping, dynamics and distortion).

We’re almost out of space, so let’s wrap up with a quick run-down of DrumComputer’s other notable features. The Kit page gives access to the Pitch, Decay and Modify mod source controls for all eight Engines at once, as well as choke groups and a useful Finalizer effect (transient shaping, dynamics and distortion).

MusicRadar verdict: It’s not for everyone, but DrumComputer’s singular sound makes it a fine addition to the software percussion landscape.

"DrumComputer’s powerful three-tiered synth engine produces sounds unlike anything we’ve heard so far in similar instruments, and the sequencer might be the most flexible rhythm machine you can find."
Bedroom Producers Blog