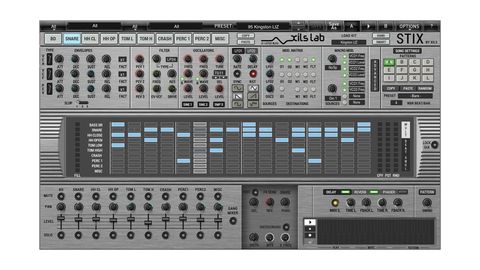 Even with a few notable things missing, StiX is a highly creative virtual drum machine that comes bursting with quality sounds and encourages experimentation.

Over the last few years, French developer XILS-lab has delivered a consistently excellent range of emulations and reworkings of classic analogue synths, including the XILS 3 and 4 (VCS 3) and PolyKB (PolyKobol), as well as the wholly original Oxium.

StiX (VST/AU/AAX/RTAS) is in the second category, being a multifaceted drum machine that combines ten virtual analogue and sample- based sound sources with a ten-lane x0x-style sequencer, a ten-channel mixer with three send effects (Delay, Reverb, Phaser), and distortion on every channel.

Although each of StiX's ten drum sources is labelled by category (BD, Snare, etc), this nomenclature is purely for user reference, as each identical source is a full-on drum synth with three oscillators: two virtual analogue and a sampler/noise generator.

The VA oscillators can run in Morphing (fully adjustable between triangle and pulse) or Sine (sine wave with adjustable waveshaping) modes, and both can be set to reset their phase with every incoming note or not. The sample oscillator provides sub-menu access to StiX's 390-strong sample library, plus the ability to import your own.

As well as the oscillator controls, StiX's Advanced page houses each sound source's resonant Filter (with seven modes and overdrive), three Envelopes (VCA, VCF and pitch) and two LFOs with tempo sync and optional retriggering. The envelopes are hardwired to their stated destinations, but three further sources (LFO1, LFO2 and OSC2) can each be assigned to up to five simultaneous destinations (OSC1 Pitch, OSC2 Pitch, OSC1 Waveform, OSC2 Waveform and Filter cutoff) in the Modulation Matrix.

For custom modulations, the Advanced panel also includes the Macro Modulation Matrix, in which two freely assignable sources can be pointed at up to four parameters. Selecting the Fixed source enables you to simply use the Amount knob as a manually controlled modulator.

With everything you need seemingly in the Advanced panel, where does its Easy alternative fit in? First, it provides one-knob control of all envelopes (Stretch) and the collective Pitch of all oscillators, as well as access to the two Macro Modulation Matrix amount knobs (Macro 1 and Macro 2).

Then there are a few options that you won't find elsewhere, including four Velocity modulation assignments (to filter cutoff, and amplitude level, decay and release), loading of individual Drum Presets, and assignment of the sequencer Step Modulations.

Lastly, the Polystep controller pad is used to add dynamic variation to up to four selectable parameters: two assigned to the X axis, and two to the Y axis. Up to eight 'balls' are positioned on the X/Y pad, influencing the aforementioned parameters, and StiX cycles through the balls with successive sequencer steps. Activating Move animates the balls, which is handy for adding an element of semi-randomness.

StiX includes 64 Drum Kits built on 707 categorised Drum Presets. There's lots of variety on show, and the menu system can be sorted in various ways, including by synthesis Type, making browsing a breeze.

There's a fairly even split between synthesis- and sample-based sounds, as well as plenty that combine both. Despite the presence of a few Roland classics in the sample set (courtesy of Wave Alchemy), slavish recreation isn't really what StiX is about, and overall, we were very impressed by the originality of the sounds.

Alongside the traditional sampled acoustic samples you'd expect (including congas, tablas, shakers, kicks, snares, toms, hats and cymbals), there are many that drift away from typical drums and percussion towards more contemporary percussive noises. Regular and Smart randomise options are also on hand for generating fresh Drum Kits from nothing.

Nevertheless, the sounds are really only half the story, as StiX also includes over 700 great ready-made rhythms, called Patterns. A handful of Patterns can be loaded directly into the Pattern section, where random patterns can also be generated, but the vast majority of the Pattern library is actually stored within the 120 Global Presets, which combine Drum Kits and Patterns.

Once again, the variety is impressive, with a stack of styles covered including house, bossa, electro and swing. We find it strange, though, that the Patterns within the Global Presets aren't also available directly via the Preset section.

StiX's feature set is weighted towards sound generation (oscillators, filters and modulation) rather than finessing (EQ, dynamics, etc), and while that's by no means the end of the world (individual drums can be routed to their own outputs for EQing and compression in the host DAW, of course), we are quite surprised at the lack of such essential onboard processing.

It would really benefit from sample editing, too, even if that just meant basic start- and end-point adjustment. Those criticisms, along with our slight frustrations with Pattern loading and exporting, impact on the score - but there's still lots to love here, not least the precise sound generation and tidy interface. StiX deserves to find plenty of fans amongst those after a beatbox that's anything but run-of-the-mill.