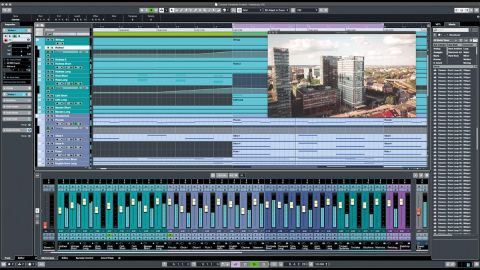 A solid update to a great DAW, though whether you choose to update now will depend on your own workflow and needs

Steinberg now has a regular cycle for updates to the Cubase DAW product line, so there was little surprise when Cubase 10.5 was announced in November.

Over the last few versions, the look of Cubase has been tweaked and, for the most part, modernised, and 10.5 adds to this with changes to graphical performance and the ability to colourise mixer channels.

This is good in principle, though changes have been made elsewhere to the colour coding of channels, which only makes this a partial improvement – and there remain issues with the legibility of text and object scaling (some of which are new in this version). Other visual anomalies exist in windows not yet updated to the current darker scheme (eg Audio Connections – which would also benefit from functional updates to its handling of External FX).

In terms of new plugins and processing, 10.5 comes with PadShop 2, which adds a new spectral oscillator, arpeggiator and additional presets to an already interesting synth. There is also the excellent MultiTap Delay that includes the ability to add additional effects into various points of the signal path in order to create some very complex processor chains (though you’ll have to put up with plenty of tab diving).

The channel EQ has also been updated with a ‘Spectral Comparison’ feature, which allows you to toggle between the frequency display and EQ controls of two channels, in order to make comparative tweaks. This is surprisingly effective and makes for better-informed choices when attempting balancing a mix.

One incredibly useful new feature in 10.5 is the ability to import the full gamut of tracks from other projects. It is now very easy to pull in FX or Group tracks for re-use in your current project, or even access audio and MIDI tracks with all processing and automation intact. This, combined with the new default behaviour of not automatically activating the last loaded project, makes for a far more integrated and flexible system when dealing with reusable project elements.

• Image-Line FL Studio 20
On its 20th anniversary FL Studio is a powerful and inspirational application – and a welcome addition to the Mac realm!

• Ableton Live 10
With copious workflow enhancements, a stellar synth and the amazing Echo, Live 10 is an unmissable upgrade.

On the export side, a welcome addition for those who are writing to picture is the reinstatement (and improvement) of decent video export render features – now supporting H.264 with uncompressed audio.

Retrospective MIDI Record, has also undergone some great tweaks, allowing you to recall performances stored in the ‘invisible’ buffer on a per-track basis.

There are plenty of other smaller tweaks elsewhere, and overall this is a decent, if not ground-breaking, update. However, for those working with video, or needing to access channel settings across multiple projects, it’s more than worth the price of entry.

MusicRadar verdict: A solid update to a great DAW, though whether you choose to update now will depend on your own workflow and needs.

"There's something for everyone in the latest version of Steinberg's flagship music production package."
Sound on Sound