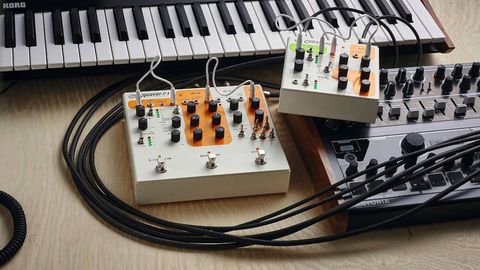 These two units offer something a little different to analogue synthesis, but it’s perhaps most useful as part of a larger system.

We took a look at the Sonicsmith Modulor A1 synth a few months back.

This diminutive synth module was restricted to a simple combination of VCO, VCA and LFO. So, although it provided some patching, it was quite limited in functional terms. More importantly, it didn’t include the centrepiece technology of the Sonicsmith range - ACO.

The so-called Audio Controlled Oscillator (ACO) chip is designed to track the pitch of incoming audio with very little processing lag, and use the resulting signal to control an analogue oscillator. The Squaver P1+ and Convertor+ on review here combine the abilities of the ACO chip with an oscillator section and VCA. The more elaborate P1+ adds a VCF, more expansive routing, and stompbox styling.

Before putting the Squaver P1+ to work, let’s look at the overall signal flow. The 1/4” audio input on the back panel passes through a high-pass filter and on to an adjustable gain section. A simple four-stage LED meter shows the post-gain level. An unbuffered (pre-gain) ‘Thru’ output is provided for daisy-chaining effects or parallel recording of un-processed audio, though this can also be switched to access the output of the next section - an ‘auto-filter’.

This filter is designed to aid frequency detection, and as such is not used for audible sound-shaping. It can be switched between 2-pole (12dB/octave) and 4-pole (24dB/octave) modes, with the former intended to provide a faster transient response. In order to avoid low-level signal elements causing problems, it initially appears that there is noise gate fed from the input amp. However, this is, in fact, part of a more elaborate envelope detector/trigger section.

The threshold is adjustable, and set with the help of the Gate LED in the synth section. The audio then passes to the all-important ACO, which generates simultaneous square and sawtooth waveforms, as well as a square-derived sub-oscillator signals one or two octaves below.

Next comes a VCA (with a Ring Modulator input) and on to the filter section. This has variable cutoff and resonance, and can be switched between low, high and band-pass modes with a selectable slope of 12 or 24dB/octave. The filter can be set to process both the dry input and synth section, or the synth alone. Given the ability to mix continuously between both, this is useful.

Very much a cut-down version of the P1+, the Convertor+ gives you an input preamp with up to +40dB of gain, helpful metering and similar gate/trigger. The independent sidechain input, with its ability to override the main input’s envelope follower, also remains. Things get sparser in the oscillator section, and the envelope follower now only controls the VCA, and is switchable from (fully) positive to negative, and off. There is no post-osc VCF here, but decent patch points. The Convertor+ gives you access to the Sonicsmith pitchtracking tech at half the price of the P1+.

As well as the aforementioned routing, the P1+ has an envelope follower that generates a CV signal that can be fed to modulate the VCA (Amount), VCF (Cutoff frequency) or PWM (width). This is normally fed by the input signal, though it can be overridden by a side-chain input (with switchable +15dB gain). An expression pedal can also be plugged-in to control the Harmony, Octave or filter cutoff. This is all rounded-off with a nice complement of mini-jack patch points for audio and CV routing.

As you can see, there’s quite a lot to the P1+, but what does it sound like? We started by plugging an electric guitar into the unit - after all, it does have three foot switches and large stompbox styling. After adjusting the input level, and bypassing the VCF section, we plucked a few notes to get a sense of the pitchtracking. Notes were detected across the full fret range quickly, with the input auto-filter setting only having a moderate effect on the result.

However, letting notes die away naturally resulted in unusual leaps of the synth (usually downward). We adjusted the Gate threshold to cut out the problematic note ‘squiggles’ before they kicked in, but this did not entirely fix it. There were also detection problems when moving between notes. Despite our best efforts at clean playing, this meant my guitar experiments were varied at best.

Substituting guitar for voice gave fewer odd side-effects. Choosing polyphonic or source with non-specific tuning, such as the output from a drum machine, gave unpredictable, interesting results. The manual suggests placing a compressor between the source signal and P1+ input to get more controllable dynamics. It may have been useful to include a very simple dynamics section and adjustable high-pass filter/EQ directly after the input amp, to minimise these issues. This would also have a bearing on the envelope follower, which can be somewhat unruly.

The addition of a release time control would have made this much more usable, or a triggered ADSR and onboard LFO. Overall, the Squaver P1+ is intriguing (if pricey), and Sonicsmith is laudable for trying something new. The ACO chip and associated tech has a lot to offer, but, like previous real-time pitchtracking systems, some accommodation is needed. But embrace the more experimental side and it opens up interesting sonic ground.