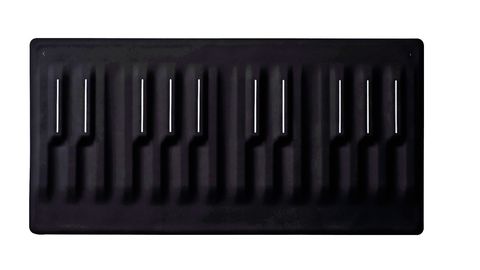 Roli’s Seaboard Rise really impressed us (despite some key spacing/width reservations) and so we were eager to try the latest Seaboard Block.

Blocks is Roli’s newest range, which includes several modules which can be connected via Roli’s onboard DNA connectors to essentially form a modular system of controllers that can be expanded as required (including up to six Seaboard Blocks to form longer/L-shaped Seaboards).

Each Block has a different remit including looping (Loop Block), performance control (Live block), expression control (Touch Block) and there are currently two ‘master’ Blocks including the Lightpad Block (a 5D flat, square MPE touch controller) and the subject of this review, the Seaboard Block.

Seaboard Block is a 24-note, battery or USB-powered keywave controller, which uses Bluetooth MIDI or USB to access sounds via Roli’s iOS and Mac apps. This is Roli’s cheapest keywave Seaboard to date at £279 inc VAT, so it’s much more affordable than the Rise and Grand models.

The keywave keyboard itself (including feel, response and general construction) feels very similar to the more expensive Seaboards, though this model has a plastic chassis instead of metal. The key spacing/ridges are slightly narrower than on the bigger Seaboards and again we find this problematic for our sausage fingers when trying to play chords accurately, particularly as your hands inevitably revert to more unnatural feeling, claw-like formations/shapes.

However, for monophonic lines it’s great, although we still hope that Roli will offer wider keywave options in the future for those with wider fingers and to suit players more used to standard size keyboards/layouts.

With the cheaper price there are some feature compromises. The performance control section is missing and, as there’s no sound engine onboard, you are reliant on external sound sources (ie Roli’s Noise app over Bluetooth, which comes with a very basic sequencer and a small range of sounds that can be expanded via in-app purchases).

Although Noise is fun, it’s not very deep or intuitive so you’ll definitely want to connect to Equator Player on Mac (a stripped-down version of Roli’s excellent MPE-optimised desktop Equator sound engine) or control your favourite plugins/software apps instead.

DAW set-up and pairing was quick using the beta version of Blocks Dashboard (which allows you to deeply configure the Seaboard Block’s response and how it outputs MIDI) and soon we were triggering Logic’s ES2 which responded well to the MPE info being sent to it over Bluetooth MIDI (use low buffer sizes for less latency).

As a wireless, portable, multi- touch controller for gigging, travelling, or in the studio, Seaboard Block is a godsend and retains the upmarket feel of its bigger siblings in a more affordable form-factor.

Couple this with the Blocks expandability and we would rather invest in Seaboard Block than any other current two-octave controller. It’s more versatile, a great performance tool that turns heads and it’s high-quality throughout. Inspiring, innovative and addictive!