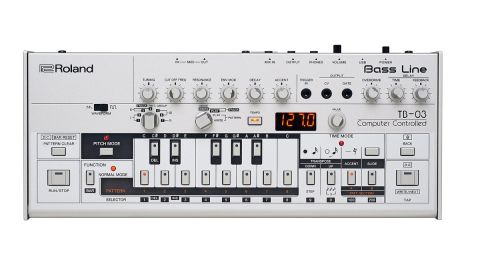 Captures the essence of the original 303 and adds a twist. But Roland could have gone further in updating the sequencer and interface.

Roland’s latest Boutique box is a silver unit laden with the small knobs and miniature button keyboard recognisable to any Acid House aficionado - those of the TB-303 Bass Line.

The new TB-03 is Roland’s second shot at a 303-style box. The TB-3 Touch Bassline (part of the Aira range) revived the single oscillator synth plus sequencer combo idea, but with a very different approach to design and functionality. It drew criticism for being too much of a departure, especially as the marketing hyped it as being a faithful recreation of the original - at least in sonic terms.

But what requirements does a true inheritor of the 303 crown have to fulfil? In terms of synthesis the original TB-303 is incredibly simple. It offers a single oscillator switchable between sawtooth and square waves. This is then routed through a 24dB/ octave four-stage diode ladder filter - not an 18dB/octave filter as sometimes gets mentioned.

The filter has controls for filter cutoff and resonance. The filter does not extend into the realms of self-oscillation, but does offer a very pronounced peak. This comes into its own when combined with the simple two-stage attack/decay envelope generator. In reality the attack is fixed, so only the decay gets its own knob. Pushing up the envelope mod and adjusting the decay time facilitates the classic 303 filter squelches.

This isn’t quite the full story, as the signal also passes through a VCA stage linked to the Accent control that raises the sound level when required. There’s little else in terms of amplitude refinement - notes are generally on or off, so it is the filter that provides the main contouring here. That’s not much for something that fetches over £2k secondhand - this could be one of the most expensive secondhand synths on a cost per knob basis.

However, this isn’t the full story. The 303 also plays host to a pattern- based sequencer that controls the pitch of the internal synth. But, as well as automating note sequences, it also allows you to specify accents and pitch slides. The addition of these are where the recognisable sound of the 303 in full flow comes together.

The TB-03 takes the original 303 as its starting point and makes a few functional and sonic additions. One of the ‘features’ of the TB-303 was its quirky sequencer’s programming system. This facilitated entering note pitches separately to note lengths and rests - a big contributor to the ‘press some buttons and see what happens’ approach to pattern creation.

The new box offers this as well as a Step Recording Mode that allows you to enter notes, rests, accents and slides (tied notes) while stepping through each note in the sequence. The Value knob (linked to a stepped continuous encoder) allows you to move back and forwards in the sequence. However, despite maintaining the Tap Writing mode of the original (for entering real-time note timings) there is no real-time recording mode.

Given that the TB-03 can be mounted in the Roland K-25m Keyboard Unit, or receive notes via MIDI, this seems a missed opportunity. Also, although it’s understandable that the TB-03 stays close to the TB-303 interface, this means many of its convoluted key presses remain. Roland could have gone further with the display. Adding a menu button and a few others combined with an alphanumeric display wouldn’t have broken the bank. Digital devices are easily updated to add new features but with a fixed interface they have to resort to adding unlabelled key combinations.

The TB-303’s tone has been the subject of many forum rants and YouTube videos, and the belief that nothing matches the real thing has a bearing on the secondhand price.

It could be the simplicity of design and limited range of tones that makes it so easy to focus on the subtleties, unlike, for instance, a vintage polysynth. In both these cases though, the difference between apparently identical units should not be underestimated - and don’t expect comparative tests of clones and digital models at similar parameter positions to deliver definitive results either. That is the nature of analogue.

The TB-03 sounds very good. There are times when it lacks the original’s magic but others where that bubbling liquid squelch or hollow tone gets exceptionally close.

In its latest iteration the Bass Line also adds built-in Overdrive and Delay/Reverb effects. While both are useful, it is the distortion element here (with three different selectable flavours) that is perhaps the most immediately alluring. There are countless classic 303 tracks where what you hear is a heavily driven version of the Bass Line sound, so having this directly to hand is a nice addition - even if some will prefer the sound of their own specific nasty guitar pedal.

The CV/Gate outputs from before are joined by a Trigger In that facilitates external analogue control over the sequencer (making it a nice pairing with TR-09’s Trigger Output). Full size MIDI in/out as well USB MIDI and audio in/out are also included. So if you find the internal sequencer frustrating you can control it directly from your DAW (or capture sequences for further arrangement).

A further benefit of the external DAW approach is parameter automation, which is not supported by TB-03’s internal pattern/track sequencer. Taking this into account begs the question as to why studio-bound musicians wouldn’t just use a plug-in such as AudioRealism’s Bass Line 3?

There are currently a number of alternatives to the TB-03, many of which employ ‘real’ analogue circuitry. If you must have analogue, then the TB-03 isn’t for you. But for everyone else looking for that classic tone it is well worth checking out.