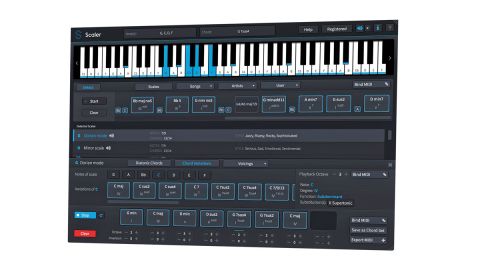 It falls flat at the offline export stage, but in every other regard, Scaler is a powerful aid for musicians of all ability levels.

For the computer-based musician uneducated in the complexities of music theory, the construction of chord progressions can be a serious sticking point.

Plugin Boutique’s new release aims to present a solution to that problem - and empower the trained composer  - by detecting the best-fitting scale for an incoming MIDI note sequence, suggesting sets of chords to fit it, and enabling those chords to be strung together into a progression.

Depending on your DAW, getting started with Scaler (VST/AU) will or won’t involve a simple setup procedure - see But how does it work? Once you’ve got it up and running, load one of its many genre-based preset chord progressions (including artist contributions by the likes of Carl Cox, MJ Cole and Opolopo), or hit the Detect button and feed it some MIDI in real time by playing your MIDI keyboard or via a clip on the hosting track.

Scaler captures the incoming notes and chords as a series of blocks in the panel below the keyboard, and suggests a number of scales and modes to which they belong, ranked by the number of notes and chords in the sequence that fit each suggestion, and complete with mood descriptions (‘Jazzy’, ‘Bluesy’, ‘Sentimental’, etc). Helpfully, the blocks for notes and chords that don’t fit the scale are bordered in grey. But how does it work?

But how does it work?

Scaler is a plugin instrument capable of outputting MIDI as well as audio. With regard to the latter, a piano and three sampled synth sounds are built in for scratch work, so you can quickly get a chord progression together for export as a MIDI file entirely within it.

Obviously, though, the idea is to trigger other instruments via Scaler, and how this is set up depends on the host DAW. For VST hosts, Scaler loads as an instrument plugin onto a MIDI track, the output of which is sent to a second track (hosting the target instrument) using the DAW’s routing system.

For Audio Unit hosts (ie, Logic Pro), the included ScalerControl MIDI effect plugin is loaded up instead. This is identical to the regular Scaler, but sits in front of the target instrument on the same track, outputting MIDI directly to it. It’s certainly the more elegant of the two approaches, although it only captures the raw triggering notes to the track, not the chords output by the plugin.

With a scale or mode selected, its chords are laid out in the next panel down as another set of blocks - either the seven diatonic chords in Diatonic Chords view, or every chord (including suspensions, extensions, etc) for every degree of the scale in the Chord Variations view, along with possible substitutions. Alternatively, there’s the Voicings menu, where any of 11 preset voicing sets for the selected scale can be loaded (‘Voicing 1-7’, ‘6ths and 7ths’, ‘Minor 7ths, 9ths’, ‘Triads inverted’, etc).

Moving the mouse pointer over a chord block lights up its constituent notes in the keyboard, and all note and chord blocks can be triggered by mouse or MIDI input (in Bind MIDI mode), making it easy to instantly jam out a progression with one finger for immediate recording.

Once you have a set of chords that you like the sound of, you can sequence them into a progression in the Progression Builder by dragging chord blocks (from the input set or the suggestion set) into the eight mouse/MIDI-triggerable slots. The controls below are used to shift each block up and down in octaves, and set them to all possible inversions. Hit the Play button to hear the progression played as a fixed- tempo series of block chords, then save it as a preset and/or export it as a MIDI file.

Scaler is a fast, intuitive and genuinely educational compositional assistant that delivers a limitless diversity of chord progressions with no music theory or keyboard skills required. However, the inflexibility of previewing and MIDI file export is an issue. You can’t even set a note length for each chord, let alone edit velocity, spread notes out in time for ‘strums’, or anything else. We understand and appreciate that the exported block chords are just a starting point for working up in a MIDI editor - and when using the VST version, you can record Scaler's MIDI output onto another track for further editing, of course - but hopefully more functionality is on the cards for future updates.

That said, despite its rudimentary export options, Scaler is an incredibly useful tool for composition novices and experts alike.