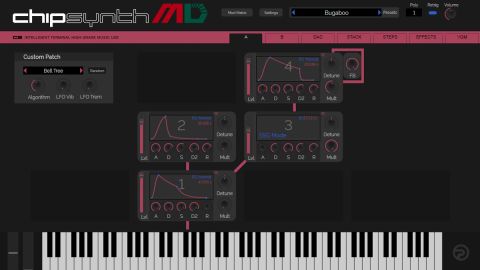 Unique and affordable, Chipsynth MD nails the Mega Drive emulation and brings it up to date with a wealth of modern features

The eagerly awaited follow-up to 2018’s Chipsynth PortaFM sees much-loved Canadian developers Plogue recreating the soundchip from the Sega Mega Drive/Genesis 16-bit games console of the 90s, and deploying it as the foundation for a plugin synth (VST/AU/AAX/standalone) geared up for both vintage chiptune-style noises and complex contemporary sounds.

No samples are involved – this is pure coded emulation, taking in the full architecture, right down to the OPN2’s peculiar 9-bit DAC, which used time-division multiplexing to manage playback of one sample at a time from each channel in sequence.

It even includes a VGM player for playback of raw Mega Drive sound files, complete with mute and solo of channels in the mix, adjustment of tuning and playback speed, and one-click copying of sounds to the synth’s two patches.

In actuality, Chipsynth MD comprises six full and independent Mega Drive emulations – one for each of its six stackable voices. Each voice comprises not only the OPN2’s six four-operator FM channels, but also three square wave and one noise SPSG channels, and – replacing one of the FM channels when required – a sample player, both of which we’ll come back to.

Each of the six OPN2 channels can be set to one of two FM patches – A or B, both functionally identical – with layer 6 also offering the aforementioned DAC-sampler player as an option. Eight preset algorithms are selectable, and the four operators move around to visually represent the signal flow from carrier(s) on the bottom row through modulator(s) above. A bit of colour-coding would have been welcome here, were we to nitpick. Very helpfully, though, a sizeable library of “classic” OPN2 patches is onboard, providing plenty of quality starting points for your own algorithmic manipulations.

The operators facilitate a good level of control, including Level, Detune and up to 15x frequency multiplication for pitchshifting and waveshaping. A five-stage envelope – the extra stage being a second Decay phase in between the Sustain and Release – contours the dynamics, and eight special looping envelope shapes are on hand via a graphically representative menu panel. These are primarily intended for FX patches, but they have their melodic uses as well. Operator 4 features a Feedback knob for self-modulation: the precise effect this has depends on the patch, but it generally brightens and distorts the sound.

Alongside the usual velocity sensitivity setting, envelope speed and volume are modulatable by pitch. Vibrato (pitch) and Tremolo (volume) LFOs are also onboard, the former applied globally and its Rate inexplicably buried away in the Settings page, despite there being more than enough room for it in the main UI, and the Tremolo working per-voice and activated independently for each operator.

Also worthy of note is Channel 3’s Special Mode, in which the operators in its selected patch can be individually detuned and the whole patch retriggered at audio rate for an edgy, aggressive ‘synced’ sound.

The SPSG was a feature of the Mega Drive’s video processor, enabling compatibility with the Sega Master System, and it comprises three square wave channels and a noise channel, the last switchable between extended noise and a 1/16 cycle, and outputting at one of three fixed frequencies, or tracking the frequency of Channel 3. The SPSG does have its uses for organs and percussion, but is very much secondary to the main FM channels in the grander scheme of things.

The DAC sample player, meanwhile, appears to be mainly for triggering individual hits from drum loops, as it automatically slices the imported sample and maps the results to consecutive keys with no option to simply pitchshift/timestretch the whole sample across the keyboard. Bit reduction and jitter are on hand for messing things up, and it works well enough, but we don’t really see the point.

All ten channels (six FM/DAC and four SPSG) are brought together in the Stack page, where they’re individually turned on and off, tweaked in terms of key range, detune, volume, pan,

It all comes together in the Stack page, where the ten channels are assigned, mixed, detuned and delayed delay and glide time, and locked to fixed frequencies if required. Modulation is applied in the Mod Matrix and Steps pages (see Mega modulation), and the Effects page houses a very well-equipped Arpeggiator and three powerful signal processors: Chorus (inspired by the Roland Dimension-D), Ambience Reverb (with pre-delay and diffusion) and Delay (four discrete taps with feedback and delay time modulation).

With its unusual interface, Chipsynth MD certainly isn’t the easiest of synths to program, but the preset operator patches and excellent effects greatly speed up the process of getting from sonic (we’ll not stoop to hedgehog puns) idea to final product.

What’s most impressive of all, though, is how punchy, clean, voluminous and animated it can be made to sound, thanks in no small part to that six-layer architecture and the wicked step modulation sequencers. It’s versatile, too, happily serving up everything from basses and percussion to keys, pads, plucks and FX.

Make no mistake about it: Chipsynth MD is a fine retro FM synth in the broadest sense, capable of far more than the blips and bloops its gaming origins imply.

MusicRadar verdict: Unique and affordable, Chipsynth MD nails the Mega Drive emulation and brings it up to date with a wealth of modern features.

"The possibilities are endless with Chipsynth MD. It’s such a powerful and very innovative tool that can be used in many different genres of music."
Audio Plugin Guy