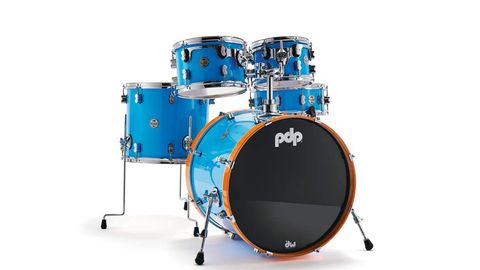 PDP may be a brand in its own right but it is inextricably linked - for all the right reasons - to DW. The Concept LTD is infused with the design flourishes and build quality - not to mention looks and sound - of its parent company and is bang on with the price too.

PDP was founded in 1999 by US heavyweight Drum Workshop.

Rather than introducing entry and step-up level kits under its own moniker, DW instead opted to create a stand-alone brand to tap into this end of the market. PDP remains close enough to enjoy a good deal of the proprietary knowledge and, inevitably, more than a whiff of the allure of its mother brand; the association alone gives the company a head start on its rivals.

The Concept series of kits was launched in 2012 and includes maple and birch shell options along with walnut veneer and retro-chic wooden hoop spin-offs. Announced at NAMM 2018 and arriving in August, the Concept LTD is a limited- edition kit available in one configuration and a single colour scheme only. The maple shell pack (there is no birch alternative) is made up of a 22"x18" bass drum, 14"x5" snare, 10"x7" and 12"x8" toms and a 16"x14" floor tom.

The bold lacquer finish of Gulf powder blue is inspired by Ford’s legendary GT40 sports car, which won the Le Mans endurance race in 1968 and 1969 wearing the same colours. To keep things authentic the bass drum hoops are finished in Marigold orange, which provided the accent colour for the original Gulf GT40. With so many sparkle, sunburst and fade lacquer jobs found on the outside of contemporary drums, it’s a refreshing change to come across simple block colours that complement each other perfectly and also have a historical and cultural resonance outside of music.

The plans for the colour scheme were pretty much the first thing that PDP came up with when devising this kit and it’s not hard to see why it was deemed a good idea; the result is deep, glossy and flawlessly applied. With the advent of Remo’s Colortone technology it would be possible to re-skin the kit with a set of orange heads to really accentuate the colour contrast (the kit comes shipped with Chinese-manufactured single-ply heads that feature the logos of PDP, DW and Remo). As it is, the kit has the look of something more bespoke and definitely from a higher price bracket than the listed RRP and specs.

Though PDP proudly states that all of the company’s design work is penned in California, the kit, like the heads, is manufactured in China. And well built it is, too; each shell is near-perfectly round and building the individual drums finds all components slotting together accurately, turning smoothly and possessing the unmistakable feel of quality.

At this price point it would be expecting a lot to include North American maple in the shell construction, and the maple used is of European extraction which meets all the relevant CITES environmental regulations (as all other wood-shelled PDP drums do). Details of the ply layup were not supplied by PDP, but the inner ply for all of the review drums has the grain running horizontally, which suggests a consistent arrangement. The toms and bass drums are 7-ply while the snare drum is 10-ply. Bearing edges are finely cut at 45 degrees across all of the individual drums; the gentlest of roundovers is found on the toms and bass drum while those on the snare drum are narrowed to fractionally sharper peaks.

PDP’s dual turret lugs are dotted around the toms in all the right proportions - 12 on the two rack toms and 16 for the floor tom and bass drum. Small in size, they make an unobtrusive visual presence and, no doubt, extend a minimal influence on shell resonance. Ten double-ended variants are fitted to the snare drum.

The lugs’ design clearly references DW’s classic turret lug and the family resemblance is unmistakable. High-end DW drums are fitted with hoops, which are graduated in thickness according to the diameter of the drum and this feature has been incorporated into the Concept LTD kit, too. So, the 10" rack tom’s hoop is 1.6mm thick, those on the 12" tom and 16" floor tom are 2.3mm while the snare’s is 2.5mm.

The STM suspension mounts allow the toms freedom to move under playing but are sited cleverly so that head changes can be undertaken without having to unhook the tom from its post. The only difference between the PDP and DW versions is the size and shape of the apertures due to differences in the lugs.

An undrilled bass drum is not an option with this kit (across the Concept series a mount-free kick is similarly unavailable, with only the range-topping Concept Exotic offering one as an extra). Nonetheless, the bass drum comes complete with two Velcro-fixed triangular pillows. Arranging them so that they are just kissing the batter and resonant heads it’s immediately clear that the bass drum possesses a low fundamental note. Dark, powerful and with just a hint of breath in the rapid decay, its sound is as big as the dimensions would suggest.

To be honest we’re not huge fans of carting such sized drums around. But once planted, the pay off is the colossal depth of the note and the sheer presence of the drum, both within the kit itself and the entire backline. It’s the sort of response that makes sound engineers smile and bassists frown; or is it the other way around?

Sitting atop the bass drum and quietly humming in sympathy are the rack toms. Out of the box the attack dominates and they really punch through the mix. This is undoubtedly helped along by their short depths; any stick movement is relayed instantly into sound. Swapping the supplied heads for twin-ply examples rolls off some of that keenness, swelling the mid-to-low frequencies and beefing up the note in the process. Here, they sound no less alert and authoritative but have added muscularity to boot. The floor tom also benefits from the same head swap, which tautens its note and quells any lingering overtones.

With its 10 plies and sharper bearing edges the snare drum springs into action with eagerness. It’s a dynamic drum that gives an appropriate response at pretty much any volume. Hit hard it delivers an ear-piercing crack that stands toe to toe with the pugilistic bass drum, guaranteeing crunchy backbeats. Treated a little more delicately it shows its versatility, faithfully conveying stickings, accents and everything in between. The warmth of the maple is evident as well, particularly further away from the centre of the drum where its range of expression really opens up. A poised and adaptable drum that is impressive enough to be marketed alone.