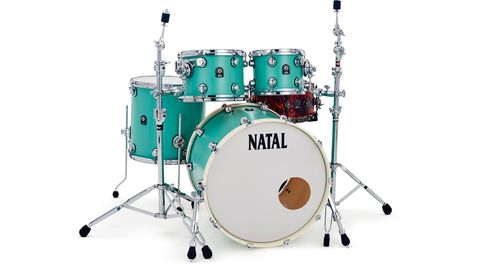 Don’t be fooled by the low price, this is a seriously good drum kit.

We’re writing this review not a mile away from the Ace Café on the North Circular, the famed stop-off for the so-called café racer bikers of the 1960s.

Natal is not the first drum company to take inspiration from the headstrong bikers of early rock’n’roll, invoking the spirit and colour of that tough-glamour era.

Natal Drums’ line-up is admirably simple. The top drums are called Originals and are distinguished by the species of wood you choose for your shells - ash, birch, maple or walnut. The budget Arcadia series is a simplified version in birch or acrylic.

Now we have the Café Racer, which is essentially the same as the Originals, but introduces a new shell wood that allows Natal to bring you professional standard drums at an even more mouth-watering price.

Right from the off in 2010 Natal and Marshall decided to do things properly. Natal was determined to bring a fresh new look to British drums, which entailed a major investment to create unique hardware designs to personalise all the metalwork.

Thus the distinctive sun logo on rounded Hayman/DW-style lugs, plus design ideas carried through all the metal fittings.

Natal’s Originals series all feature the same hardware and look, simply distinguished by the choice of different woods and finishes for the shells. Now the Café Racer sees the debut of tulipwood. But tulip is a flower, you say. Ah, yes, but in eastern USA tulipwood trees reach over 100 feet into the sky and tulipwood is actually a well-known timber in the furniture/joinery trades, apparently used as a cheaper substitute for cherry and walnut.

Tulipwood is known also as American yellow poplar, although confusingly it is not related to the poplar tree. This so-called yellow poplar has long been used in drum construction, famously as the inner ply in classic American mahogany and maple shells from the 1950s/’60s.

So it’s a cheap filler, then? Well, reading up about tulipwood only makes you wonder why it is not more widely used in drum construction. Okay, it is a bit plain in the looks department, but it is easy to work with, has a fine grain, doesn’t split, can be finished smoothly and takes paints/stains well.

And, it is light but strong - great attributes for drum building. Additionally, tulipwood is sustainably harvested in the eastern USA and Canada and is widely available. The shells are six plies, 6.9mm thick, which is the same as Natal’s Originals ash/birch shells (the maple, walnut and single birch shells are 5.5mm and seven plies).

Our review kit is in Seafoam Green Suede, a satin smooth, duck egg blue-green. It’s eye-catching, but there is a wide range of 12 finishes if this particular beauty does not grab you. Choice ranges through five lacquers in single and dual sparkles, a couple of matte bursts, three ‘Suedes’, an exotic fade and natural tulipwood veneer.

Although designed in the UK, Natal drumsets are built in Taiwan but are constantly monitored by the UK team. Whatever they are doing, the result is impressive. The shells are spot-on round, which is something you cannot say for many far more expensive drums. It gives the lie to anyone who still thinks that shells have to be made in the home country and not in China or Taiwan.

We found the Originals to be accurately round in our first Natal review and that was evidently no fluke as these new shells are just as precise. They are as good as it gets in terms of shell measurements. For example, the six-lug small tom is exactly 9 13/16" in diameter at all three cross points (measuring across the bearing edges from lug-to-lug mounting points).

This makes the shell spot-on at 3/16" undersized from the nominal 10". (This under-sizing is common and allows the head to sit easily with no binding.) Inside, the pale whitish-coloured shells are sanded and sealed to a smooth finish. The 45° bearing edges are level and have a slight round-over that is bees-waxed by hand.

This sort of attention to detail would do credit to any top-price kit. In fact, nothing about these drums looks or feels penny-pinching. The circular Natal sun-logo lugs recall Hayman and DW/Camco, and they are extra-heavy, being zinc-cast. The sun logo, the Natal name and the geometrical logo design all appear embossed on various parts of the hardware, creating a strong visual brand identity.

Bass drum claws, the mighty bass drum spurs - which, again, are of hefty top-spec proportions – the tom mount blocks and so on are all substantial. Further attention to detail is seen in the Tru-Tune tension rods. Each has three washers: one split and one normal steel (which usefully cannot slip off), plus a removable black nylon ring. And the rod thread ends are dipped in red nylon that acts as a de-tuning brake.

The 22"x18" bass drum arrives already carefully set up, en route to a Natal artist. As such, it has an Evans EMAD batter, a logo front head with offset porthole and a piece of rolled cloth acting as light extra damping inside. With a felt-head beater, the first strike is revealing. It always is.

The anticipation of what is this going to sound like? There are no worries on that front at all. With the single, thin foam ring in the EMAD perimeter tray the sound is subdued from gargantuan and yawning to a resounding thump. A compacted thud with impressive depth, nicely harnessed so as not to reverberate too much.

So, no overlong sustain, but there is plenty of meat here. A smack, a shudder, then... silence. A proper rock bass drum that’s worthy of the Marshall rock litany. This unfussy, controlled power runs through the entire set. It’s actually quite a dry sound, although this has much to do with the twin-ply coated Evans G2 batter heads.

You might get slightly more character from a maple or walnut Originals kit, with greater resonance from their thinner shells, but this is compact, dependable and very orderly sounding. At the opposite end from the bass drum, size-wise, the 10"x8" tom has an almost bell-like clarity – a dense note, sparing on overtones, trim and tidy.

The extra inch of depth from the 12"x9" pitches it further from the 10", making it easier to bridge the gap to the classic 16"x16" floor tom, which itself sits comfortably with the deep bass drum, offering a thick, fat bass drum-like thud. There is a feeling of unity and belonging across the kit, which in turn helps promote a wider, more flexible tuning range.

It is held by the other half of the system, which is an ‘L’ rod bracket with a non-slip aluminium ball (rather than hard resin) clamp. With the solid lugs, 2.3mm steel hoops and giant spurs, all of this metalwork makes for something of a heavy kit, but gives the whole set a reassuring, weighty vibe. It also contributes to the dense, relatively dry and taut sound.