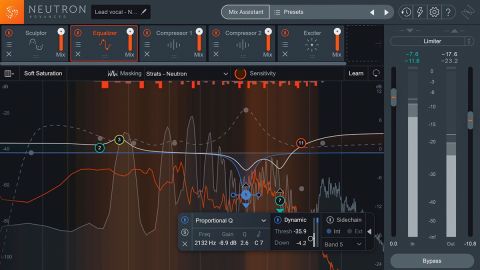 With both previous versions of Neutron scoring 9/10, the pressure is on for the latest iteration of iZotope’s amazing ‘smart’ channel strip plugin to meaningfully improve on its predecessor. We’ll concentrate on the new features of v3 for the purposes of this review, but first, let’s get up to speed with a general summary.

Neutron is a semi-modular channel strip boasting seven (previously six) superb processing modules – two multiband Compressors, EQ (with Dynamic mode and the excellent Masking Meter), Gate, Exciter, Transient Shaper and the new Sculptor – invoked in whatever combination and order you like (and also included as individual plugins), plus an output Limiter. What’s always set it apart from other similar offerings, however, is the Track Assistant feature, which ‘intelligently’ analyses the incoming audio and creates a tailored preset for it.

Neutron is available in three versions: Elements, Standard and Advanced – see the iZotope website for the differences. We’re looking at the flagship Advanced here.

Neutron 3 sees a radical overhaul of the GUI, with the module control panels now overlaid over the metering displays within a single pane à la Nectar (9/10,   265), enabling upscaling of the latter; much smoother spectrograms; and corner-drag resizing. For the most part, it’s positive and sexy stuff, but we do wish there was the option to switch back to the old decked display style for modules running in multiband mode, as having to select bands individually to view and edit their controls is a step backwards from having them all visible at once.

Despite being nudged sideways by Neutron 3’s headline addition, Mix Assistant – which we’ll get to shortly – Track Assistant is still very much a marquee feature. It works just as it did in previous versions, but now also deploys the new Sculptor (see The Sculptor module) in its generated presets, and offers Instrument type sub-menus for more detailed targeting.

As ever, the presets Track Assistant serves up are only intended as starting points for tweaking, rather than being in any sense ‘final’, so it’s still obviously important to approach it with that in mind.

The new Mix Assistant uses ‘intelligent’ track analysis to set up the level, pan and width controls in the Visual Mixer introduced with Neutron 2. Via the magic of Inter-Plugin Communication, this unifies the level, pan and width controls of all running instances of Neutron (or the included Relay utility plugin), the idea being to load one onto every track, set all tracks to unity gain and centred panning, then adjust their levels and stereo positioning collectively in the Visual Mixer instead of the host DAW’s mixer.

The first step in the Mix Assistant’s Balance dialogue is to select tracks for inclusion and set one or more of them to be the Focus for the algorithm to keep front and centre, as it were. With that done, simply play your song from start to finish, then marvel as the levels and pans of every plugin are automatically set up to create a mix. Immediately after analysis, you get the chance to tweak the relative levels of five arbitrary groups – Focus, Voice, Bass, Percussion and Musical – and reassign individual tracks between them if the algorithm has classified anything incorrectly. Within each group, the algorithm adjusts the gains of the component tracks to get as close to the level set by that group’s fader as possible. Hitting the Accept button commits to the group levelling and dissolves the group faders – after that, you can only change individual track volumes, pan positions and stereo width using the Visual Mixer’s control pucks.

With the right source material, the results can be very impressive. On a well-recorded pop/rock song comprising around 20 tracks with vocal Focus, the suggested levels made for a remarkably solid foundation on which to build – we were pleasantly surprised at the cohesion achieved by the mixing algorithm. However, on a vocal-free house track, featuring a heavily modulated bassline, the nonsense it made of the non-percussive signals weren’t really worth the time spent loading all those Relay plugins. This didn’t come as a huge surprise, though, electronic music being far less algorithmically quantifiable than acoustic/electric instrumentation, we assume. Another consideration is that the settings made by Mix Assistant are, of course, static, so you still have to manage any fader rides yourself.

We should also mention the great work iZotope have done on CPU/memory usage and loading times with Neutron 3, yielding a night and day improvement over v2 in both regards.

Although Mix Assistant isn’t as fundamentally useful as Track Assistant, it can certainly save some time at the start of the mixing process. It’s about time the Visual Mixer got a bit of love, however: it still doesn’t even offer mute and solo buttons, let alone the ability to colour individual track controls or customise their icons.

All that aside, the main selling point of Neutron is and always has been the outstanding quality of those signal processing modules. The Track and Mix Assistants, tasty though they may be, are really just the innovative icing on an already delicious cake.

"Neutron 3 can pinpoint masking issues, as well as suggesting suitable processing for individual tracks and for sweetening the overall mix — but it goes further than they did, thanks to a new automatic Mix Assistant."
Sound On Sound

"The innovative AI tools can give mixed results, but this still remains an excellent toolbox of high-quality, easy to use tools."
MusicTech