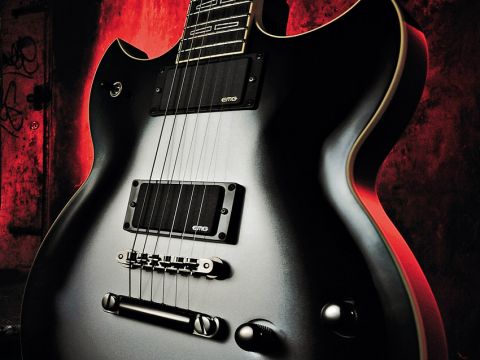 If you're looking for a meaner looking and sounding modern Les Paul alternative, look no further than this

Importantly, each is quite specifically aimed at a type of player and Yamaha is unofficially referring to the 1820A as the SG Modern.

Construction-wise, all the guitars in the 1800 range are identical, Yamaha opting for a more traditional build style, with not a through-neck in sight. Instead, the trio uses more conventional glued-in mahogany necks with a classic combination of mahogany body topped by a new, deeper carved maple top.

Created in conjunction with heavy metal juggernauts Mastodon, the 1820A is definitely a guitar for those of us who prefer things loud, louder and louder again. And as it's equipped with the ultimate metal combo of an active EMG 81 and 85 set, it promises to deliver nothing less than full, unbridled power.

Like the other guitars in the new 1800 series, the 1820A's hardware is of the highest quality, though the black nickel hardware featured here, including metal knobs, looks particularly cool alongside the flawless silverburst finish and the menacing look of those twin EMGs.

In comparison to its two counterparts in the 1800 range, the SG1820A, equipped with its active high-output EMGs, doesn't offer much in terms of dynamics, though that's not what they're designed for.

The SG1820A, by design, is a different beast altogether. We go straight for the gain control and are immediately swamped with lashings of sustaining distortion and ripping heavy rock and metal tones. The EMG 81 isn't a touch-sensitive subtle pickup - it likes to rock and as we dig in it only picks up its aggression. The Mastodon theme really suits here and it's a whole lot of fun to play too.

Switching to the neck, the EMG 85 here is very direct and has a raspy edge around the note, though it's far from mushy or even harsh, in fact for high-octane solos in the vein of Kirk Hammett, it's ideal.

What's obvious is that Yamaha Music Craft's philosophy of offering players' the highest build quality, individual styling and excellent playability is certainly not lost on these three new additions to the SG range.

Alongside this, they'll only be available in limited quantities due to their hand-crafted construction, so you might have to be quick if you want to track one down.

All three guitars in the SG1800 series offer a very viable alternative to the likes of the Les Paul, and with their extensive high-end spec, bullish looks and beautiful finishing they're sure to offer a match to any Gibson in terms of construction and style.

Of course, thanks to the Les Paul's undeniable heritage, not everyone will see these SGs as being quite so classic.

Of the range it's clear to see why the 1820 is being referred to as the SG Modern; compared to the vintage tones of the 1802 or the generic rock/blues feel of the 1820 the 1820A has modern, gained rock written all over it. Yet all three are strong instruments - it's up to you, you can't miss.