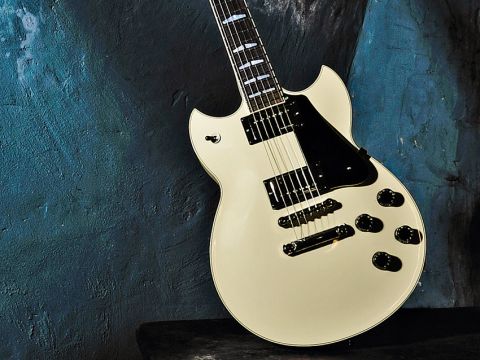 Importantly, each is quite specifically aimed at a type of player and Yamaha is unofficially referring to the 1820 as the SG Classic.

Construction-wise, all the guitars in the SG1800 range are identical, Yamaha opting for a more traditional build style, with not a through-neck in sight. Instead, the trio uses more conventional glued-in mahogany necks with a classic combination of mahogany body topped by a new, deeper carved maple top.

The SG1820 was apparently inspired by a custom order from none other than Aussie rockers, Airbourne. They'd asked for a stadium-ready SG1000 with PAF-style humbuckers and a simpler aesthetic. And that's exactly what we've got here.

The vintage white finish, married with the single-ply off-white binding and black pinstripe purfling, looks as cool as an old Les Paul Custom. The blend of subtle nickel hardware, black speed knobs and a pair of covered Seymour Duncan '59 humbuckers add the finishing touches to a classy looking guitar.

Using the same clean-ish tone and pickup selection as its sibling the SG1802, the SG1820's response is somewhat warmer and spongier in comparison. The under-wound Duncan '59s don't over-egg the high-end 'zing' from the top strings but the depth and sustain provided mimics that of a vintage-y Les Paul.

The SG1820 also begins to open up with a loud amp tone and plenty of overdrive. The bridge '59 likes to be hit with ample gain and we're soon well into bigger stadium rock territory, with Airbourne-esque rhythms easy to come by.

In contrast, the neck Duncan '59 feels a little woolly, and seems to fight with the density of the SG's body. That said, we still get fairly raucous blues solo tones and thick and sustaining Santana-style leads that, with the tone rolled down a notch, nail his more modern signature solo tone.

What's obvious is that Yamaha Music Craft's philosophy of offering players' the highest build quality, individual styling and excellent playability is certainly not lost on the new additions to the SG range.

Alongside this, they'll all only be available in limited quantities due to their hand-crafted construction, so you might have to be quick if you want to track one down.

All three of the SG1800 series offer a very viable alternative to the likes of the Les Paul, and with their extensive high-end spec, bullish looks and beautiful finishing they're sure to offer a match to any Gibson in terms of construction and style.

Of course, thanks to the Les Paul's undeniable heritage, not everyone will see these SGs as being quite so classic.

Of the range it's clear to see why the 1820 is being referred to as the SG Classic; compared to the vintage tones of the 1802 or the modern, gained rock feel of the 1820A the 1820 has generic rock/blues written all over it. Yet all three are strong instruments - it's up to you, you can't miss.