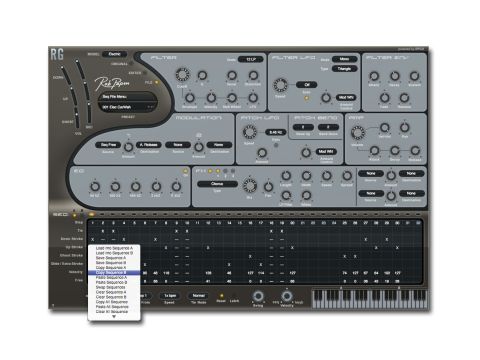 RG is something of a niche product, but for rhythmic riffing on tap, it's right on the money.

At its most basic, RG offers sample-powered emulations of three types of guitar: Electric (Fender Stratocaster), Steel 8th and Steel 16th. The latter two are for eighth- and 16th-note grooves respectively. You get just major and minor chords for each guitar type (note that the Electric one has minor7 chords instead of minor).

After picking a guitar, you can browse through a selection of presets that generate a rhythm guitar sequence when you hold down the note that corresponds to the key of your track, with separate octaves for major and minor chords.

Of course, there's plenty more to it than that, but what we need to make clear is that RG is not a guitar emulator per se - the best way to describe it is as a guitar-groove generator. A simple guitar part can have a serious impact on your tracks, and there are enough styles and sounds here to keep you going for a while.

League of its own

As an inspirational composition tool, RG is peerless - it's like having an awesome sample library in a completely editable format. Simply fire up RG, scroll through the many presets, edit one you like, build a beat behind it and you're on your way to a fresh, guitar-powered track in minutes.

The more adventurous user, though, will want to delve a little deeper, and at its core RG is also a synth, with full-on envelope controls, filtering, modulation, LFOs and effects. The filter section has a '0 to 10'-style Cutoff knob that'll seem familiar to axe-wranglers, and can be modulated by the dedicated envelope and LFO, velocity and mod wheel.

Low-pass and high-pass filters come in 6, 12, 18 and 24dB variants, while band-pass and notch are available as 12 and 24dB types. Wicka-wacka wah-wah parts are easily dialled in using a low-pass filter, but for more unusual sounds, there are even comb and vowel filters.

The aforementioned filter envelope is your standard ADSR type, although it does have an extra Fade parameter - dial this in and the sustain section either glides up to full or down to nowt over the specified time.

The Filter LFO, meanwhile, has sine, triangle, saw up/down, square and sample & hold shapes, and a few other handy features. It can be synced to the song tempo, as can the dedicated Pitch LFO.

The thing that sets RG apart from a conventional guitar sample patch is the groove sequencer, where you can program in up-strokes, down-strokes and ties. You also get Glide for the Electric model, Ghost Stroke for Steel 16th and Electric and Extra Stroke (hand mute on the strings) for the Steel 8th.

You may also set the length of the pattern (up to 32 steps) and velocity of the individual steps. Usefully, you can have two sequences per groove patch and these are mapped to different parts of the keyboard, for easy variations.

But as great as the sequencer is, it does have its limitations. One of our main gripes is that, despite having a Swing control, there's no way to apply your own quantisation grid to RG, and it can sound a little 'robotic' as it comes. Some randomisation of timing/velocity would be nice, to add that human factor.

However, what we'd really like to see in future versions is a way of sending MIDI notes into RG and using these as the individual note triggers - enabling the user to define the groove quantise manually - not to mention an 'export groove to MIDI' function.

There are a number of complicating barriers to this suggestion, though, so we can't bring ourselves to criticise the omission of such functionality on the first version of the plug-in.

In addition to all this, there's a no-nonsense Amp panel, a five-band EQ and a Modulation section with two slots for setting up your own modulation routings, which will please more advanced users. There are 33 sources and 22 destinations - you can, for instance, have a row of the sequencer control the Filter LFO Speed, or effects mix, and so on.

Speaking of effects, there are 22 of 'em, and you can use three at once (in series, similar to how you'd connect up guitar stompboxes). Standard offerings include delay (two types), reverb, chorus, flanger, phaser, distortion and compression.

There are some tailored to guitar, too, such as an amp and cabinet simulators and wah-wahs. Most of these processors are good, although tone hounds may prefer to use a separate guitar effects plug-in.

Effects that are not so typical for guitar processing include multimode filtering, ensemble, a bit/sample-rate degrader, waveshaper, 'multidistort' (this offers many types of distortion), stereo widener, autopanner, and - yes! - a trance gate. There's even a dedicated FX mod matrix. You can generate 'guitar-ish' parts that slot neatly into more electronic styles, in a way that real guitar playing generally doesn't.

The irony, of course, is that to get the most convincing results from RG, you need a pretty good grasp of guitar playing to begin with. The same can be said of just about every emulation of a real instrument, though, so it's not fair to judge RG harshly for this.

Of course, Rob Papen might argue that it can do things that you can't do with a guitar and that it adds a new dimension to conventional guitar riffery, but that's probably not going to wash with your average strummer.

Non-guitarists will find some things to criticise too. Sure, it has a variety of presets and you can customise the sequences, but the real value of RG lies in non-guitarists being able to sit down and quickly generate in-key riffs or inspirational loops.

However, the scope for instant and ever-varying satisfaction is, ultimately, limited, as the plug-in does impart a distinct sound and vibe to your productions. You can't load your own sounds into it, either, and there's currently no indication as to whether there will be expansion packs in future.

We like RG, but be sure to give the downloadable demo a whirl first to see if this really is the product for you. If you don't play guitar and need rhythmic riffing to go, then we think RG is a fantastic idea that sounds great.

And as if to prove this point, within two weeks of installing it, we'd used it on no less than two remixes and two original tracks. After all, making music is what it's all about, right?

Can RG do rhythm guitar? Decide for yourself: