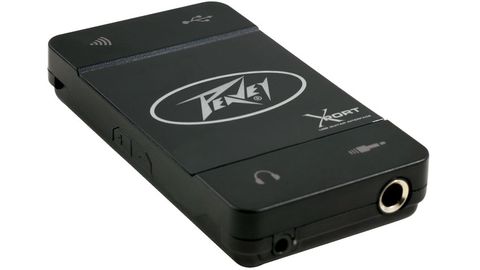 The Xport is a great guitarist's companion to a laptop that will work for recording or practice wherever you are.

USB audio interfaces come in all shapes and forms, but Peavey's aim with the Xport is obviously to create something that's easily portable and specifically for guitars.

Very light and about the size of an iPod, the unit sports a single 6.4mm jack input, a connection to computer via an included USB cable, plus two 3.2mm mini-jack stereo outputs - one for headphones, the other a line output to connect as you wish.

Included in the package is the HPse version of Peavey's ReValver amp modelling software plus the Reaper DAW software for recording.

The Xport is powered from your computer's USB port, so no batteries are needed, but you do need to load drivers from the included CD. Operation couldn't be simpler once you have designated the Xport as your preferred interface - you simply get on with playing or recording, setting the monitoring level via the plus and minus buttons on its left-hand side.

The Xport inputs a nice strong guitar signal into your computer for recording and, in use with several different amp-sim programs, we had no problem with latency. The bundled version of ReValver features just two of its most popular amp models, the ValveKing and 3120, along with a selection of stompboxes and effects. But it's a useful introduction to guitar/computer integration and is upgradeable to some better-specified versions.