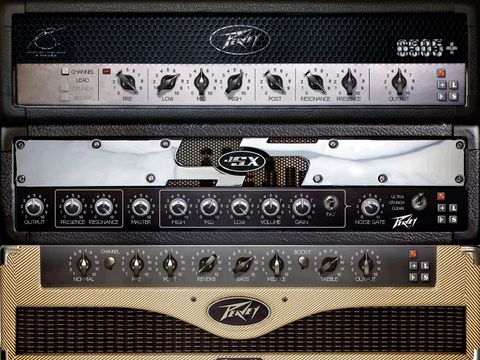 While the competition might be a little slicker, for realistic, great-sounding Peavey amp simulations, ReValver is the new king.

The big new additions in ReValver Mk III come in the shape of six new amp models. Peavey, which has acquired Alien Connections, the software's developer, has been bold enough to emblazon these with the names and front panels of the real hardware, demonstrating its confidence in the sounds that the software delivers.

As with previous versions, modules are added to a virtual rack and can be reordered simply by dragging. They're processed in series, from top to bottom, although you can achieve parallel routing using the Signal Splitter tool. Tooltips pop up for almost all controls, making operation easy.

ReValver is MIDI mappable, with MIDI learn available for all parameters. Host automation can also be used in, say, Cubase or Live, although the range of accessible parameters is predetermined in this case. New for this version is the Mixdown mode, which increases the sound quality, and is intended for use when rendering your song.

As for those amps, first up is the dual-channel 6505. It works best when the gain is turned fully up, producing smooth, modern high-gain sounds that are perfect for rock and metal.

The 6505+ is a variation that offers even more bite courtesy of extra virtual valves. It must be said that these emulations knock the spots off any previous attempts to model Peavey amps, and are definitely our picks of the bunch.

Next, there's the JSX - Joe Satriani's signature model. This three-channel amp can produce sweet, clean sounds as well as Satch's trademark heavy tones, though they're a bit more scratchy and classic rock-sounding than the 6505's.

It's not all screaming distortion and wailing leads, though - some more subtle, laidback sounds can be found on the excellent Classic 30 combo model, for example. With it, we were able to produce fine, crunchy tones as well as that elusive 'just breaking up' sound that's ideal for blues rhythm parts.

All the amps in ReValver are available as separate preamp modules, as are many of the corresponding power amps; numerous speaker cabinet/mic combinations can be separately emulated by the RIR convolution-based speaker simulation.

Alternatively, the Speaker Construction Set enables you to design speaker models, including ones that don't exist in the real world (huge or tiny cabinets, for example).

The only minor gripe we have is that it would've been nice to have seen a Peavey bass amp included to complete the set.

Apart from the new amps, ReValver Mk III remains largely the same as before. You get nine other amps/preamps, including emulations of a Mesa Boogie Dual Rectifier, Marshall JCM900, Vox AC30, Fender Bassman and a Matchless.

There's also a set of nine 'tools' (including tuner), and 30 stompboxes and effects. Among the latter, you'll find all the usual suspects, including overdrive/distortion, modulation effects, delay, reverb, octaver and so on.

The thing is, though, that ReValver's 'old' sounds were average at best, so quantity isn't a big selling point. Peavey has made changes to the transformer, tube and power supply emulations, so the pre-existing modules do sound different, but it would be a stretch to say they sound significantly better. However, the brand new convolution reverb module is a worthy addition.

We should point out that ReValver does have one trick up its sleeve that no other amp sim can boast: its rack can host VST effects. This means you can use other guitar-oriented plug-ins in conjunction with ReValver, or, indeed, the sort of effects that you'd never find in a traditional setup.

While the old ReValver modules may still be a little uninspired, Peavey's involvement has clearly paid off, because the six new amps are first-class and easily rival the ones you'll find in the likes of Guitar Rig and AmpliTube. In fact, they're more convincing than the former and maybe even the latter, too.

ReValver may not be as slick as the other big amp sims, but it has unique features such as in-depth tweaking and VST hosting. Sound-wise it's a giant leap in the right direction that gives us high hopes for future development.

Take a listen to what ReValver Mk III can do in our audio demo: